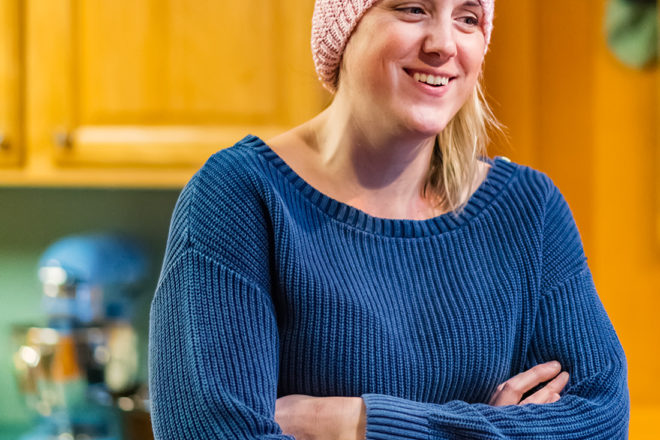 Kari Baumann has been a persistent force in the fight for better reading education for her son, and for children throughout the state. Photo by Len Villano.

In fourth grade, Gibraltar student Grady Baumann struggled to write his name. Diagnosed with ADHD, slow-processing disorder, dyslexia and dysgraphia, he had no self-confidence, said his mother, Kari Baumann.

But Grady’s school offered few solutions. When Baumann and her husband, Chris, recognized Grady’s struggles in first grade, they were told to give it time. Most schools won’t screen for dyslexia until a student is in third grade. By then, students such as Grady have fallen perilously behind.

The outlook for students who are unable to read by fourth grade is frightening. Seventy percent of inmates in America’s prisons can’t read beyond a fourth-grade level, and two-thirds of students who can’t read proficiently by the end of fourth grade will end up in jail or on welfare.

“I didn’t want my child to be that statistic,” Baumann said. “If he doesn’t learn to read now, he’s not going to learn in high school.”

She was angry, questioning why Gibraltar couldn’t teach her child how to read. But as frustrated as she was with Gibraltar, she soon realized it wasn’t a teacher problem, or even a school problem, but a statewide educational problem.

“We’re not even close to the worst,” she said. “Teachers aren’t trained to teach children like Grady. They don’t have the tools, and the school and the state aren’t providing them.”

Baumann wasn’t going to accept that for her son. Friend Katie Rock introduced her to a reading program called Lindamood-Bell designed for students like Grady and that had helped Rock’s child immensely. Baumann enrolled Grady in an eight-week summer course in the intensive-reading program, which gives students one-to-one tutelage. He progressed one and a half grade levels by the time it was over.

Baumann was sold. Through a combination of fundraising and personal savings, she paid to enroll Grady at Lindamood-Bell in Deerfield, Illinois, north of Chicago, for the fall semester. She and her mother, Sandy Weisgerber, took turns living in a friend’s apartment there with Grady during the week, returning home Friday nights, then driving back on Sundays.

Grady needed an immediate solution, and though it required almost all of Baumann’s time and energy, she found reserves to turn her attention to a larger goal: helping the next child and the next parents who would face the same battle.

“I want those teachers to help these kids before they get as far as Grady did,” she said. “The school needs to educate their teachers on the science of reading.”

Baumann fought with Gibraltar to recognize dyslexia and change its approach to reading education. For more than a year, she has attended nearly every school board meeting, updating the board on Grady’s progress to show leaders that there is another way. She joined the school’s student learning committee and has opened the eyes of school board members, teachers and even state legislators.

“Kari is tenacious,” said Joel Kitchens, First Assembly District representative and a former member of the Sturgeon Bay School Board. “She’s really been a crusader on this, and she’s done it in a respectable, productive way.”

Rock was struck by Baumann’s passion.

“That woman has got a fire behind her that I have never seen before in a human,” Rock said. “She is so inspiring to me. I look at her, and my jaw drops open.”

And at Gibraltar, Baumann’s initial anger has turned into persistent, informed pressure.

“She has caused me to rethink our reading program,” said Stephen Seyfer, former Gibraltar superintendent and a current board member. “She took it from a personal crusade to a systems crusade.”

For most teachers, Seyfer realized, preparation to teach those students who don’t just “get it” in the traditional way is “so thin as to almost not be present.” But it’s not just a few struggling students. Studies estimate that as many as 25 percent of students have difficulties learning to read in the traditional way, and last year a report from the Wisconsin Department of Public Instruction showed that 60 percent of Wisconsin students are not proficient readers.

The learning committee realized that its approach was inadequate for many children.

“Given our resources,” Seyfer said, “all children should be proficient readers.”

This summer, all of Gibraltar’s kindergarten through sixth-grade teachers and aides will go through a two-week boot camp in the Orton-Gillingham methodology of teaching reading — a program closely aligned with assisting children who have dyslexia.

“We can draw a direct line from parent advocates like Kari, to her learning more, to the committee, to the board adopting it,” Seyfer said.

Entering the next school year, Gibraltar teachers will have more training in the science of teaching reading than most other teachers in the state. And in February, in part due to Baumann’s efforts, Gov. Tony Evers signed a law implementing the state’s first dyslexia guidebook. The guidebook will provide a road map for teachers, administrators and parents in educating children who have dyslexia.

“It’s exhausting,” Baumann admits, but she’s not looking back. “I wouldn’t trade it for the world. My son has taught me so much. He’s an amazing child. He knows what he wants; he just doesn’t know how to get it.

If something doesn’t work, he’s going to try to find Grady’s way. He’s my role model.”

Before participating in the Lindamood-Bell program, Baumann said Grady told her he felt like a failure.

A nine-year-old shouldn’t say that, she thought. “It was night after night of him saying, ‘I’m stupid. I don’t want to look at this. I’m never going to get this.’”

Today his confidence has grown, and in February he returned to his fifth-grad classmates at Gibraltar, reading at a third-grade level. In January, during one of their final drives back from the Lindamood-Bell center to their apartment in Deerfield, Grady began reading road signs, sounding out the word “Roosevelt.”

“Mom, now I will be able to drive one day because I can finally read road signs!” he said.

Grady has worked hard for that, and so has a mother who won’t quit.