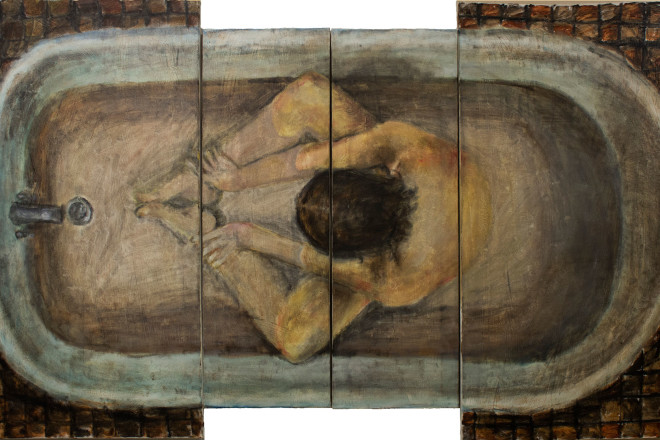 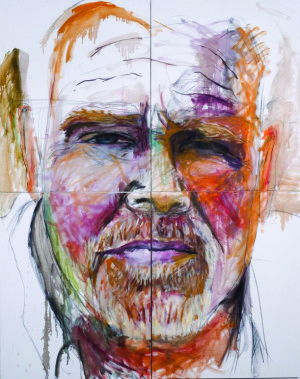 Despite these up close and personal creations, Roth hesitates to use the word portrait.

These paintings of people are often based on photos and inspired by her surroundings. A frequent patron of local hangouts, Roth is a quiet admirer of the interactions of those around her, taking in the visual intricacies of humans in conversation.

“People and their interactions with each other – there is so much that people communicate that isn’t through using words and I think that that’s something that I am influenced by,” Roth said. “…I took a class on small groups and you can tell that there is a character about each person or a role that you can see in a group that is interesting. You can tell it based on people’s expressions and gestures.” 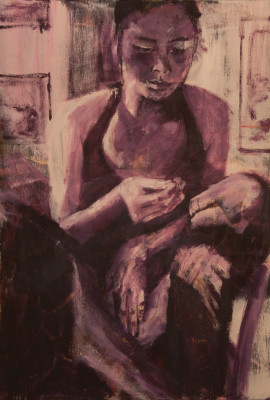 When she immortalizes these scenes on canvas, a defined color palette is often an unnecessary restriction – occasionally Roth will challenge herself to stick with limited colors but more than anything, she prefers to express the personality of her subject – and her feelings toward them – through a range of colors.

She is also a big believer in the power of self as a model. When she began her independent study in high school, Roth painted from what she had the best access to: humans. Sometimes that was in the form of magazine photos, sometimes in the form of family, friends and, a lot of the time, herself.

A decade later, self-portraits remain a way for Roth to put her ideas into action.

“Recently I’ve been getting these ideas and it’s kind of like having a song in your head where you won’t feel any relief from getting that song out of your head until you start singing,” Roth said. “That’s kind of what these ideas are. I’ve always had them but I think I suppressed them for a while because sometimes they’re weird and I think about the viewer and what they would think of it. I forget how subjective art is and I put it in this category as unacceptable but really it’s not.”

Roth demonstrates her point with a story on a self-portrait she created during her freshman year of college called “Bathtub.” In it, the viewer has an aerial view of a woman in a gray-blue bathtub. Vulnerable comes to mind.

The painting went over well in her art classes but when her family saw it, the questions came and at the time, Roth didn’t know how to take them. 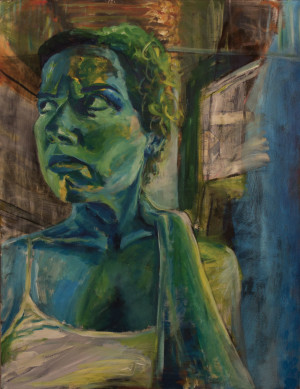 “They were like, ‘What are you doing? Are you okay? What is this painting about? What is this person doing?’ and I didn’t realize that those were good questions,” Roth recalled. “I got self conscious about it and I put them away for a while and hung them in my mom’s stairwell or in her closet. I just took them out a year ago, brought them here, still didn’t hang them up because I was nervous. I had four canvases and I decided I was done feeling vulnerable about that and I hung it up at Base Camp and I couldn’t tell you how many reactions I had to it that I really regretted not hanging it up a long time ago. It’s strange seeing someone stop in their tracks just to look and experience and try to understand what’s happening. It communicates something with them and resonates with them. That was just awesome. I sold it and I was like, ‘What the hell,’ (laughs). If these ideas come, I’m just going to go with it and get that song out of my head.”

This is the third time Roth has exhibited work at Base Camp. Her current show will be up through the end of February. Base Camp is located at 10904 Highway 42, Sister Bay. For hours call 920.854.7894. For more information on the artist, visit kate-roth.com.