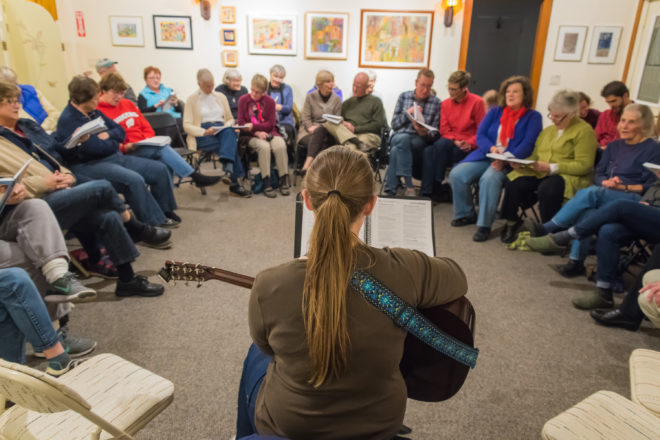 A weekly, collegiate folk music gathering in the early 2000s played a pivotal role in Door County musician Katie Dahl’s beginnings as a guitarist. It was where she first learned to play guitar and became acquainted with Rise Up Singing: The Group Singing Songbook and its 1,200-song collection.

In the dozen years since she graduated from Carleton College, where she served as co-president of that weekly gathering – the Carleton College Folk Music Society – Dahl is resurrecting the communal spirit of playing music and singing with her monthly series, Sit Around Singing.

Now in its second season, Sit Around Singing is a monthly, open invitation to Door County residents and visitors to gather in song at the Unitarian Universalist Fellowship (UUF) in Ephraim. Folk singer-songwriter Dahl leads the gatherings, which are held the first Thursday of the month.

A combination of motherhood and political division in America inspired Dahl to establish the series in October 2016, when her son was six months old.

“I wanted him to be able to come to a gathering like this and know these songs and have a community feeling,” Dahl said. “Another reason I wanted to do it was things just felt politically so terrible…I was having a lot of anxiety about the civic future of our country and that felt like a really, big scary thing to think about.”

Establishing a monthly music community “felt like a small, local action in my own field of expertise I could do to deal with that.”

Sit Around Singing is a play on the centerpiece of the gatherings, the 1,200-song collection Rise Up Singing: The Group Singing Songbook. Those who attend the gatherings are provided a copy of the songbook (some funded by Dahl, others purchased by UUF) or invited to bring their own copy. From there, it’s a free-flowing event built on requests.

“Anyone can call out a song request,” Dahl said. “Everyone has their book that they follow along with. If I know it or can stumble through it, then we’ll do it or if they can lead it with me strumming the guitar then we’ll do it.”

Rise Up Singing includes a range of songs, from traditional Russian rounds to showtunes to classic rock songs. The event includes an intermission, during which guests are invited to enjoy snacks and refreshments.

The gatherings have proven popular for people of all ages, and since beginning in late 2016, Dahl estimates upwards of 25 guests attend each event.

“People who come really like it,” Dahl said. “I get a ton of positive feedback and it seems like people feel grateful that it is an opportunity. I don’t think it’s a need that anyone else would’ve identified prior to this. I don’t think there are people sitting around being like, ‘You know what we need is some young people to move here and a singing group!’ But I think that now that it’s there, I do feel like people are grateful.”

Sit Around Singing was developed to be low commitment, Dahl explained. People can attend all or a few of the gatherings throughout the year “and it’s not going to change your experience of the event.” Regardless of attendance record, the purpose remains the same:  to bring people together in small way. For UUF choir director and board member Cyndy Stiehl, it was an easy mission for the Fellowship to get behind.

“There’s nothing else like it in Door County,” Stiehl said. “It’s a unique experience of people coming together to do something that is innately human and communicative and wonderful and warm. We share a time together that brings us closer.”

Gatherings take place the first Thursday of every month from 7 – 8:30 pm at the UU Fellowship, 10341 Water Street/Highway 42 in north Ephraim. The dates for upcoming Sit Around Singing gatherings are Feb. 1, March 1 and April 5.