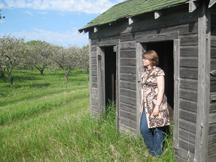 When Katie Dahl picked up a guitar for the first time, it was the music of Cheryl Wheeler, Pete Seeger, Dar Williams – all of her favorites – that she chose to play. Today, the accomplished singer/musician/songwriter no longer needs to perform other artists’ music. She brings her music and her unique style to the Door Community Auditorium Fireside Coffeehouse on Saturday, Jan. 30 at 7 pm. Tickets are $14.

Since learning to play the guitar, this honey-voiced musician has turned her musical attention entirely to the acoustic folk music she’s always loved, singing everywhere from the cliff country of Mali, West Africa, to a canal boat in southern France, to AFT’s outdoor theater nestled in the pines of Peninsula State Park. Dahl is fast making a name for herself with her rich alto voice, honest vocals, intricate fingerpicking, and incisive lyricism.

Last July, Katie celebrated the release of her debut record, County Line, which she has described as “a folk-infused exploration of love and the American landscape.” The album contains two cover songs – “Gibraltar Town,” by Katie’s songwriting hero, Fred Alley, and “Paradise,” by John Prine – and eight Dahl originals that epitomize the thoughtful, literate lyricism and straightforward melodic sense that characterizes all of Dahl’s songwriting.