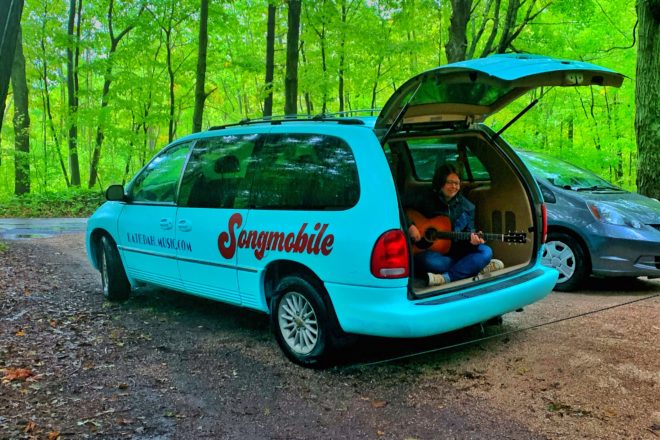 The pandemic pushed artists in new directions this year to pay the bills and remain connected with audiences. For local indie/folk artist Katie Dahl, that included creating a traveling Songmobile and giving curbside concerts. Photos submitted.

When the pandemic struck earlier this year, Katie Dahl found herself stranded in Amsterdam at the beginning of her first European tour, looking down the barrel of a stack of tour expenses and – suddenly – no tour to pay for them. Long before livestreams became a constant in our lives, Dahl set up in the lobby of her hotel, and through one virtual concert, she was able to completely cover the costs of the tour – in large part thanks to donations from her Door County fans.

Livestreamed concerts have become this indie/folk musician’s way of remaining connected to her fans this year – and paying the bills throughout the spring. This summer, she and her husband – fellow musician Rich Higdon – created Curbside Songs, a mobile venue retrofitted from an old minivan. They painted it bright blue and added a jaunty “Songmobile” on its side.

“We bought a battery converter so we could set up the PA in there,” Dahl said, “and drove around with this rolling mini-venue, which was super fun.”

Fans who were used to attending her weekly gig at The Cookery in Fish Creek asked her to sing at their houses, where the mini-concerts fed not only the audience’s need for live music but also Dahl’s own desire for a performance fix.

And that’s how she and other musicians are rolling this year during the global pandemic: getting creative and honing new skills to keep the music flowing. For Dahl, this included a summer partnership with Northern Sky Theater for a virtual music-and-chat show called The Jeff and Katie Show.

She now has a new offering called Katie Dahl Has Friends, which streams weekly on Tuesday and features a different guest – either a musician and or someone she admires in a different field. Dahl also set up a Patreon page to share songs as they’re created and old songs that have never been released.

These crazy times are driving her creative efforts to keep paying the bills while remaining connected with her fans, and in that effort, Dahl has the great benefit of being rooted in Door County – roots that sink so deep that Guthrie (named after folk-legend Woody), her son with Higdon, is a seventh-generation Door County resident.

Dar Williams – whom The New Yorker has described as “one of America’s very best singer-songwriters” – has picked up on this groundedness in a place. Williams wrote that Dahl’s songwriting contains “journeys that are firmly grounded in a sense of place – beautiful, real landscapes that help you feel places that you may have never been before. That’s the very best kind of songwriting.” And that’s high praise from one of Dahl’s own musical heroes, and someone she has enjoyed sharing the stage with several times.

American Songwriter called Dahl’s most recent release, Wildwood, a “deeply felt homage to the county Dahl’s family has called home for seven generations,” and it’s the evocation of Door County in her music that Dahl believes inspires loyalty and love in her fans. She’s quick to point out that her ability to have a career as a musician is largely because of the savvy and generosity of the Door County people – locals and repeat visitors alike – who understand the need to support the arts financially.

“This place inspires such loyalty and love,” Dahl said, “and the artists whose work springs from this place help people to evoke in their minds what it is about this place that they love.”

Dahl’s first place of residence was Minnesota, mainly with her mom, whose love of music meant the future artist was listening to the greats from a young age. But Katie was initially drawn more to songs than singing, connecting with music at an emotional level rather than dreaming of being a musician herself.

“I was interested in songs as a listener first,” she said, “and it was a lot later that it occurred to me that I could be a singer or a writer of them.”

When Dahl was eight years old, she started to frequent American Folklore Theatre (now Northern Sky Theater) and became enamored with its mix of theater and folk acoustic music, often involving actors playing instruments on stage. It was from attending the theater and the influence of then-local musician Karen Mal – a singer/songwriter now based in Austin, Texas – that Dahl became interested in folk music, and the path rolled out before her.

She has released five original albums, as well as a live, original-cast recording of Victory Farm, a musical she co-wrote with Emilie Coulson and James Valcq.

As 2020 is drawing to a close, Dahl is looking forward to live music returning and continuing to write music and tour in ever-wider circles while still pursuing her loves of theater and playwriting.

“If I was writing regularly and touring 12 weeks a year, that would be cool,” she said. “And if I was meeting people I really admire, too, I would be thrilled.”