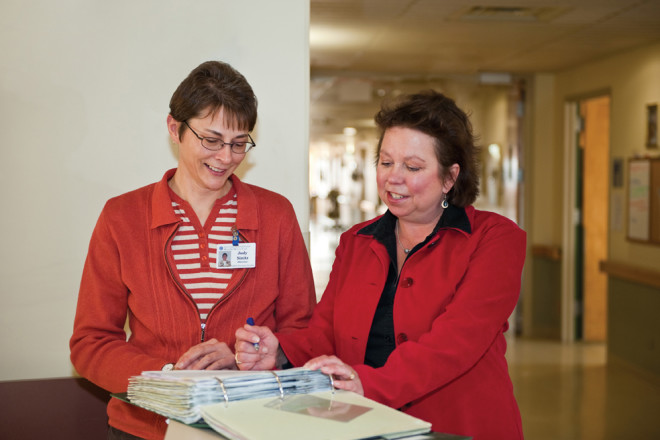 There is a lot about Door County that makes it an idyllic place to visit and live; the first things that come to mind are the natural beauty, the small town feel, and the welcoming people. However, not even Door County is immune to some of life’s challenges. Katie Graf is very familiar with these challenges and the people in the area who are most affected by them. As a social worker for Door County Memorial Hospital (DCMH) for 23 years, Katie has made a tremendous impact on patients, nursing home residents and the community at large.

Katie’s decision to enter the health care field was made at an early age while growing up in Sister Bay. After a particularly severe asthma attack at the age of 13, Katie was transported to Sturgeon Bay in a hearse from Casperson’s Funeral Home, which was how patients used to travel in pre-ambulance days. That ride and hospital visit saved her life. Apart from being grateful for the medical care that she received, she was also struck by how wonderful all the staff was and settled on a future at the hospital. After obtaining a degree from the University of Wisconsin-Milwaukee in Social Work (with a minor in Criminology) in 1980, Katie began her career in helping others. She started at Scandia Village in 1981 and worked there until 1986 when she met and married her husband, Randy. She then started working at DCMH when she moved to Sturgeon Bay with Randy.

The range of Katie’s duties as a social worker is extensive. She is there  when patients are discharged and helps arrange home care where necessary. She helps families who have lost a loved one either suddenly or at the end of a long illness. She assists people moving into the nursing home unit make a smooth transition to new surroundings. She is an advocate for her patients and residents and tries to make sure all of their needs are met. And, in addition to all of this, she also oversees Katie’s Fund.

Katie’s Fund, or the Ministry Fund as it is officially known, was begun in July of 1999 when Door County Memorial Hospital became part of Ministry Health Care and was created to provide financial support for innovative projects and programs for the poor and underserved. Ministry Health Care is part of the Sisters of the Sorrowful Mother and, as a Catholic institution, part of Ministry’s living mission is to serve the health and well being of all people, most particularly the poor. Katie’s fund began as an $8,000 grant and has grown over 10 times that amount in the years since through additional grants and fundraising efforts. One of the biggest fundraisers is the silent auction that the Social Services department organizes every year. With this money, Katie and her staff have been able to help over 1,000 locals in need.

The fund is not just a handout. It is given in addition to other help, such as directing someone in how to apply for energy assistance. Most of the donations given from the fund are less than $200. “We meet one on one with someone asking for aid,” Katie explains. “They have to fill out a one-page form but, for the most part, we act on good faith.” If there is a bigger need, such as someone needing a piece of medical equipment, there would be a special fundraising effort for that. Katie continues, “We can’t always make every amount, but we can usually pay for part of it.” Door County’s short season and income disparity makes it difficult for some to survive. While the fund has been very helpful to many, the needs still continue to grow.

While some social workers may have suffered from total burnout by now, Katie seems to have worked out a balance for herself. Although she has all of her regular duties at the hospital and sits on 12 different boards in the community, she knows when to step back and get some space. She calls this taking a “Katie Day.” This happens maybe a couple of times per month and Katie doesn’t cook or clean and gets to do whatever she wants instead. While this is Katie’s simple explanation of how she copes with taking on so much, hospital chaplain Susan Johnson, with whom Katie works very closely, has an alternate theory. “Katie is a very selfless person,” Susan says. “She has this endless, bottomless love of life which I think gives her the energy to do what she does. Every once in a while, I will see her have a bad day, but she doesn’t dwell on it. The next day, she is back to her big smile and even bigger heart.” Susan arrived here from Colorado in 2003 and is continually amazed at how many people Katie knows. “I think she must know or be related to everyone in the county!” One of her better known relatives is her mother Helen Burress who still lives in Sister Bay, now a resident at the Scandia Village herself.

Those in Katie’s care vary in age; however, she finds one of the biggest privileges in her job is being with people who are at the end of their lives. In most cases these are the elderly residents she has come to know. “To share prayers and stories at that time is such a gift,” she humbly explains. “There is just such a presence when they pass on.”

A lot has occurred during Katie’s time at DCMH. She owns to having been around the block a couple of times and has earned a few grey hairs which she proudly claims. The biggest change has to be the hospital itself. With the addition of the oncology and women’s health centers, she has seen dramatic progress. At the end of the day, though, an institution is only as strong as its people. With Katie and her coworkers at the helm in the Social Services department, the hospital is stronger for it – not to mention the rest of the county, as well.