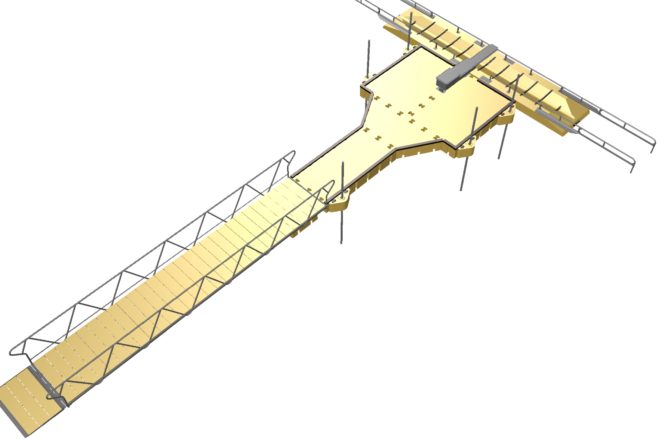 A sketch provided by Door County Parks manager Burke Pinney shows the proposed kayak launch for Carmody Park in Little Sturgeon Bay, which complies with the Americans with Disabilities Act. The end of the launch ramp will have a linear platform to provide stability prior to kayak launching and handrails along both sides to help people lower themselves into a kayak. The dock will have a bench/seat for use by people who have limited use of their legs. Submitted.

Carmody County Park has one of the busiest boat launches in Door County. Gliding into that mix – and sometimes rolling into the drink – has been an increasing number of kayakers.

This summer, a new kayak launch will separate those paddlers from the boat ramps. The dock will also have features to greatly ease the launch process for both able-bodied kayakers and those with physical disabilities.

“During COVID, we noticed a large increase in individuals who were launching kayaks from the boat ramps,” said Burke Pinney, Door County Parks manager.

Those launch techniques and results were “variable,” Pinney said. “It’s kind of precarious to launch from the ramp or docks.”

Occasionally, novice kayakers or paddlers with physical limitations or vertigo would topple into the water or be very wobbly if they tried to lower themselves into kayaks from Carmody Park’s launch docks. Some would launch kayaks off trailers, and others who had transported their kayaks on a car-top carrier would carry them to the water’s edge and get in at the ramp while boaters waited.

The end of a new dock designed specifically for kayakers will have a stable, kayak-width, linear platform just above the water’s surface. Handrails will line both sides of that chute-like platform, providing a lot of grip points for stability and safety. The dock will more than satisfy the requirements of the Americans with Disabilities Act (ADA) because it will have an ADA-approved seat or bench that can swing out over the kayak.

“It’s designed specifically for people who don’t have complete use of their legs,” Pinney said.

The county will install the kayak launch between the county park boat ramps and the docks of Wave Pointe Marina.

“It’s out of the way, so traffic can keep flowing,” Pinney said.

Pinney still does not know whether grants and donations will cover the complete $34,000 price tag for the kayak launch, but he said no property-tax dollars would go into the project.

So far, the parks department has received funding commitments from the Wisconsin Department of Natural Resources’ County Aid Grant, funding from the National Environmental Education Foundation and a donation from the Town of Gardner. As of last week, Pinney was waiting to hear award results from the Recreational Boating Facilities Grant program.

“If we are unable to achieve the full purchase price via grants, we will utilize user fees from the boat launches,” Pinney said. “Zero taxpayer dollars will be used in this purchase.”

The kayak and boat-launch fees for 2021 are identical: $7 daily, $40 annually for residents or owners of property in the county, and $55 for visitors. The fees allow launching from all sites that are county owned and operated. The fees that go to the boat-launch fund pay for repairs and maintenance.

“We use that to keep our launches among the best in the state,” Pinney said.

User fees will also pay for dock repairs this spring at Carmody and George Pinney County Parks – two of the 19 parks the county oversees. Many of the wooden joists have rotted or otherwise deteriorated under the decks of the docks at Pinney Park northwest of Sturgeon Bay and at Carmody Park, and the docks also need some welded repairs. Again, money from boaters and paddlers will cover those costs.

“That’s all user fees that are going right back into those parks,” Pinney said.

The county will seek proposals for more durable materials for the dock joists so the repairs lengthen the lifespan of the docks.