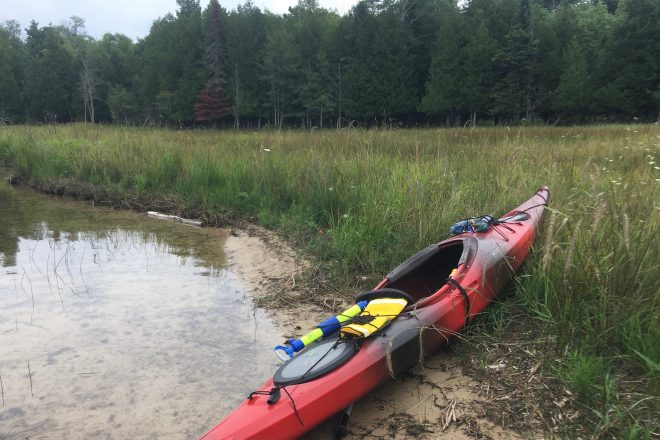 Patrick O’Connell photographed his kayak near a small parcel that the state purchased on Detroit Island many years ago when the Department of Natural Resources proposed a sixth state park in Door County. The effort fizzled, but Grand Traverse State Park still shows up on some maps. Submitted.

Patrick O’Connell has begun paddling toward a dream.

The Sturgeon Bay resident and Peninsula Kayak Company guide wants to island-hop in his kayak from Door County to revive interest in a Wisconsin-Michigan state park or national lakeshore starting with islands at the tip of the Door peninsula.

And he’s not the only one interested in promoting such a thing. There’s a Friends of Grand Traverse State Park group that says it has support from the U.S. Lighthouse Society, Niagara Escarpment Resource Network, Shoreline Charters and others.

However, Eric Hyde, the new Wisconsin Department of Natural Resources (DNR) superintendent of Newport, Peninsula and Rock Island state parks, said he has not had many inquiries about the site since starting in his post over the past year. One tiny parcel on the northeast side of Detroit Island, one on the southwest side, and three unconnected parcels along the cove on the portion of Detroit Island nearest to Washington Island are state property, but there’s no public transportation to Detroit Island and it’s not really used, Hyde said.

“It’s something that was approved as a state park – the concept of it – but [it] never took off,” he said.

Door County Land Trust owns and protects a few parcels on the island, some of those adjacent to the DNR lands, and both the state and Land Trust have online maps and rules for hunters. Hyde said during the 1970s, there was a push for a Michigan-Wisconsin state park along the lines of the Minnesota-Wisconsin Interstate State Park on the St. Croix River, but the Door County and Michigan islands state park never became a priority.

A Grand Traverse Islands National Lakeshore concept may have more support (grandtraverseislands.org), and O’Connell hopes he can help it gain some momentum and publicity.

“The national lakeshore they are trying to create includes all of the islands. The Grand Traverse Islands are Plum, Pilot, Detroit, Rock, St. Martin, Gull, Summer and Little Summer islands,” O’Connell said. “I’m hoping to paddle it all next summer. It would probably be the end of July, beginning of August because that is when the winds are likely to be calmest.”

O’Connell ventured to the islands of Door County this summer to test the waters, and on a few days when he thought it would be calm, he did not launch his kayak because of rough waves in the Death’s Door area. He also went to the Garden Peninsula in September to check the Michigan side and paddle to an island there, but again he encountered stormy waters.

O’Connell said when he paddled to Detroit Island, he found no development and no signs for a state park. He thinks he beached his kayak on part of the state land when he paddled there, judging from GPS, but it might have been private property or Door County Land Trust land. Both the state and Land Trust have maps of where their parcels are situated on Detroit Island, but both note that those maps are for deer hunters and trappers.

The DNR and Land Trust are not the only ones working to protect the islands that bridge the gap between Door County and the lower peninsula of Michigan. The U.S. Fish and Wildlife Service owns a parcel on Detroit Island, and that’s part of the Green Bay National Wildlife Refuge, which includes Hog, Plum, St. Martin and Rocky islands. All public use is prohibited on Hog and Pilot islands because of ground nesting by migratory birds and limited and treacherous access.

“We are aware of the past and current efforts to create a Grand Traverse state park, and now a national lakeshore,” Cooper said. “I hope the national-lakeshore proposal can come to fruition.”