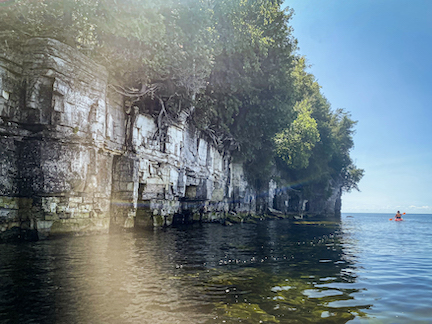 From the Eagle Trail at Peninsula State Park to Door Bluff Headlands County Park, I’ve hiked up and down along Door County’s bluffs and ventured downward to view their grandeur from the shores of Lake Michigan. But not every section of the Niagara Escarpment’s limestone is visible on foot, so my next aspiration was to experience the landscape from the lake by kayaking parallel to the peninsula.

Anticipating my first kayaking experience involved feelings of excitement mixed with a little apprehension. I can swim well, but a vast and dangerous body of water such as Lake Michigan can be intimidating. What happens if the kayak tips over? Will my legs and feet be enclosed, making it difficult to get out while I’m upside down under the water? And will I have enough upper-body strength to paddle for the entire tour?

Some of my anxieties were eased even before I entered the water. It turns out that my mental image of a narrow enclosure for the lower half of the body isn’t a kayak’s only design option – and it’s certainly not the best choice for a beginner. During this Lakeshore Adventures tour, we used sit-on-top kayaks, which are entirely open, with no leg enclosure.

Sit-inside kayaks are great for staying dry and warm, but they’re better suited for more experienced kayakers. That’s because moving in and out of the water from that design is more difficult, and they lack the self-bailing feature of sit-on-top kayaks, which drain water from small holes.

Standing on the launch at Garrett Bay, the calm, brilliantly blue water appeared more welcoming than intimidating. And aside from the occasional whirring of distant boats, I could already appreciate the quiet, secluded setting of the tour I’d selected. After preparing us with life vests and sunscreen, the guides gave a brief tutorial on paddling techniques before helping us into the kayaks.

Once we’d drifted off for a short paddle to the right, the first sight was actually below us: In water that was just shallow and clear enough, we saw the algae-covered wooden schooner Fleetwing, the victim of an 1888 shipwreck.

The guides shared some history about the wreck before leading us toward the colossal limestone cliffs of Door Bluff. As we approached, I couldn’t help but wonder about the natural history of this section of the Niagara Escarpment. The guides pointed out how the different stone colorations indicate historical lake levels, and they delved into human history as well. The area is said to be the site of the doomed battle between the Potawatomi of Washington Island and mainland tribes, when treacherous weather claimed the lives of many fighters. The lives lost during that battle and the area’s many shipwrecks have given the Death’s Door strait its name.

About halfway into the tour, we stopped to stretch our legs and explore the woods and rocky shore beneath the bluffs. We found a variety of treasures: rocks with fossils, a geode and shipwreck remnants so old they’d begun to become infused with limestone. Soon it was time to return to the water and head back to Garrett Bay.

To make the tour easier physically, Lakeshore Adventures staff suggested that my fellow intern and I use a tandem kayak: a two-seated option that gave us twice the paddling power. The person sitting in the back is in charge of the steering, but you must still coordinate with your partner to avoid constantly hitting each other’s paddles.

There’s something about the simple, rhythmic repetition of paddling that made enjoying the views extra special. My gaze during a hike along a beach or on a shore beneath bluffs is often interrupted when I have to look where I’m walking to sidestep obstacles, but aside from watching to avoid bumping into another kayaker, I could focus my attention on the open water, distant land and towering limestone cliffs.

The Wreck of the Fleetwing

A little more than 100 feet from the shore of Garrett Bay in Hedgehog Harbor, the remains of the 1867 schooner Fleetwing rest. Because the water is relatively clear and only 25 feet at its deepest, the vessel is visible by kayak.

Built in Manitowoc, the Fleetwing spent most of its 21 years hauling grain, coal and manufactured goods between Chicago and Buffalo. In 1880, it transitioned to transporting lumber from Michigan’s lower peninsula or Menominee to Chicago, requiring a trip through the Death’s Door strait.

During what became its final voyage in September 1888, it’s reported that Captain Andrew McGraw mistook lights from Garrett Bay – where we launched our kayaks – for those of Death’s Door Passage and misidentified Table Bluff. It was nighttime, and a strong, northwest gale was blowing.

It was too late to change course, so the Fleetwing crashed into the bay’s rocky beach. The crew survived uninjured, but the relentless, gale-force winds prevented salvage efforts from succeeding. The wreck is scattered in four main sections, so paddle over the 83-foot-by-550-foot wreckage site to see all the remains.