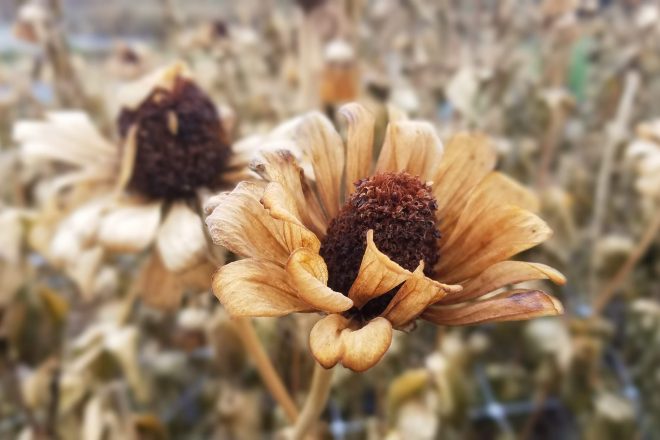 Leaving some plants in the garden until spring not only shortens the fall-gardening chore list, but it also provides important food sources for birds and visual interest during the winter months. Photo by Sara Rae Lancaster.

Although the changing leaves and cooler temperatures typically signal the end of the growing season in Wisconsin, there’s still plenty to do between now and winter. Sue Kunz, a Master Gardener and chair of The Garden Door, shares her tips and to-dos for putting this season to bed and giving next season a head start.

“So many people think you need to cut everything back and have this pristine clean slate,” Kunz said. “But that is actually the worst thing you can do for your perennial gardens in the fall.”

In fact, almost everything in a perennial garden can – and should – be left “as is” after it has died back, with few exceptions.

“The only thing you really want to cut back are plants prone to powdery mildew,” Kunz said.

Plants such bee balm and phlox are the usual culprits, followed by peonies. She recommends cutting these plants back to two or three inches above the soil.

“Leaving two to three inches not only removes any infected foliage, but [it] also leaves enough of the plant to help identify what’s there in the spring,” Kunz said. “It also helps protect the crown of the plants during the winter months.”

The remaining part of the plant offers protection to beneficial insects during the winter as well.

“Harboring insects is actually a good thing because it’s food for the birds,” Kunz explained. “If you take all of those places for insects to hide for the winter, you take away some of those food sources for the birds. Some moths and butterflies will harbor in the hollow stems as well.”

Plants that Kunz encourages gardeners not to cut back include those that provide seed sources for birds, such as coneflower and rudbeckia. She also advises gardeners to leave the ornamental grasses until the spring, not only because they provide shelter for wildlife and organic matter for the soil, but also for the visual interest they provide to the landscape during the winter months.

Unlike perennial gardens, you do want to remove all debris and plant matter from vegetable gardens to prevent disease the following season. The other reason to clear out the vegetable beds is to have a fresh start for crop rotation in the spring.

“For example, you never want to plant tomatoes in the same spot as the year before,” Kunz said.

The reason is that if you grow tomatoes – or other crops – in the same garden bed year after year, the plants will attract the same pests and diseases. Crop rotation helps to break that cycle while replenishing the soil.

“Beans add nitrogen [that] the tomatoes used back into the soil, so I would plant my tomatoes where the beans were the year before,” Kunz said.

The only exceptions to clearing out the vegetable-garden beds are those veggies that are nitrogen-fixing and grown off the ground, such as beans or peas grown on a trellis, and those that prefer the colder weather.

“Beets, carrots, parsnips, peas, lettuce – those all fall under the category of semi-hardy vegetables and can be left in the ground for a while,” Kunz said. “The tops of the plant may die, but the root part that you eat will be fine.”

Preparing for Next Year

Once the flower and vegetable gardens have been trimmed or cleared, it’s time to focus on the soil by adding compost.

“You don’t want to fertilize in the fall because that encourages growth, but you can compost,” Kunz said.

If you don’t have access to compost, make use of those fallen leaves in your yard by mowing them and using them as mulch around plants and trees. This helps to insulate the soil during the winter, keeping soil temperatures more even. Just wait to mulch until after the first hard freeze.

“Otherwise, rodents will have a wonderful place to harbor, especially around trees,” Kunz said.

That can lead to “girdling”: when rodents strip the bark from around the base of the tree trunk, leaving it prone to insects and disease.

And for those gardeners who aren’t quite ready to let go of the season, there are even some flowers you can plant in the fall. The Farmers’ Almanac lists many native plants, annuals, biennials and perennials that follow this process naturally, dropping seeds that will sprout in the spring. You can replicate that process by scattering seeds of cold-hardy varieties where you would like them to grow. Or, for a more organized approach, you can sow seeds in a prepared garden bed.

Farmers’ Almanac recommends sticking to “taprooted plants”: those that dislike being transplanted, such as poppies, lupine, larkspur, bachelor’s buttons and lunaria.

Last but not least, weed those garden beds one last time.

“Nobody likes to think about weeding this time of year,” Kunz said, “but one last weeding in the fall will help make sure those weeds don’t start strong in the spring.”

Which Seeds Can You Sow in the Fall or Winter?

Some plants that germinate best when planted later in the year include: