Greg Coulthurst of the Door County Soil and Water Conservation Department (SWCD) says that there has been a major shift in the way the department is tackling phragmites and wild parsnip – and that the new process is working to control the invasive species. 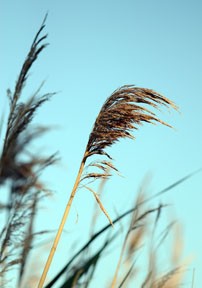 The Door County Soil and Water Conservation Department is shifting their tactic to tackle phragmites, an invasive species. Rather than smaller herbicide application projects administered by volunteers, the department is moving towards larger, more targeted control efforts funded by grants. Photo by Katie Sikora.

In the last several years, the department has been moving away from smaller herbicide application projects administered by volunteers and moving towards larger, more targeted control efforts funded by grants.

“Over time we’ve discovered that [smaller projects were] really not so effective as far as controlling these populations from expanding,” said Coulthurst at a July 16 presentation to the Sevastopol Town Board. “Doing larger control efforts we had less problems with small populations coming back onto your property if your neighbor didn’t do the treatments.”

Coulthurst provided the board with a series of maps that laid out his department’s current GPS inventory of treated and untreated areas of phragmites and wild parsnip in both the Town of Sevastopol and all of Door County.

SWCD and its volunteers have inventoried over 200 acres of phragmites along shorelines, roadsides, and natural preserves. Coulthurst said that, thanks to grant funding primarily provided by the Great Lakes Restoration Initiative, about 120 of those inventoried acres were treated with herbicide last year.

As far as the parsnip problem, Coulthurst said that most of the parsnip his department has catalogued is found on roadsides in Southern Door.

“In Southern Door County, we have 62 miles of right-of-way that we’ve inventoried wild parsnip on,” said Coulthurst. “We’re also up to about 22 acres of parsnip that’s about to encroach on our [reserve sites], grasslands, and other open areas.”

Wild parsnip seeds primarily spread by attaching themselves to equipment such as lawn mowers. Coulthurst warned those at the meeting to look out for the plant when mowing over the next couple weeks, as that is when the seeds will be ready to sprout.

“Each one of these plants can produce up to 1,000 seeds and start another big population,” said Coulthurst.

Coulthurst said that the department’s current kill rate upon herbicide application is about 95 percent and that SWCD plans to apply for a number of grants to treat acres that weren’t eligible for last year’s treatments. Most of those grants require a matching donation from the communities where the grant monies will be used.

During the public comment portion of the presentation, Coulthurst addressed a number of questions from Sevastopol residents and town board members.

Resident Dick Baudhuin’s primary concern was the lack of treatment on roadsides. Coulthurst said his department primarily targets shorelines because that’s what grant funding is available for, but he’d like to target roadsides if there is any money left over from next year’s applications.

“We know it’s out there,” said Coulthurst. “We just have to find the money to do it.”

Board member Tom Girman asked if there was anything landowners could do to treat phragmites on their own. Coulthurst answered by saying that there are some products that are minimally effective, but that there is no silver bullet currently available.

Landowners can, however, take their lawnmowers below the high-water mark between July and March as long as they use them exclusively to mow phragmites.

Coulthurst said that his department’s next step is to work its inventory efforts inland so that they know what they’re dealing with in the county’s interior.

“This project is huge,” said Coulthurst. “We’re going to take a little bite here and a little bite there and hopefully we’ll catch up.”