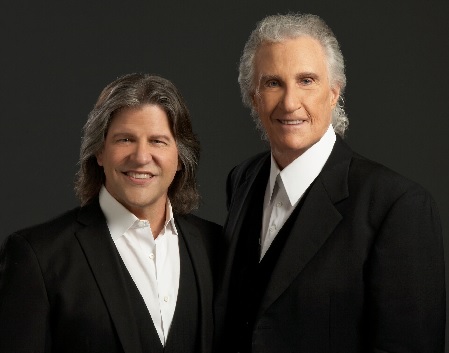 Do not miss The Righteous Brothers at the Door Community Auditorium July 22.

“Always looking forward to coming to Bobby Hatfield country,” said Bill Medley, one half of the blue-eyed soul duo The Righteous Brothers.

Medley was referring to the fact that his late partner, Hatfield, was born in Beaver Dam, Wisconsin. Hatfield died in 2003, which seemed like it would be the end of The Righteous Brothers. But in 2016, Medley teamed up with singer Bucky Heard, and the Brothers were back. They’ll perform at the Door Community Auditorium July 22, 8 pm.

Medley worked up a solo act and was singing in Branson, Missouri, in 2006.

“A lot of people were telling me I should re-form The Righteous Brothers after Bobby passed away,” he said. “I waited about 12 or 13 years. I went to see Bucky’s show that he was doing in Branson. He did a couple of Journey songs, and he sounded just unbelievable. I thought, if I was going to do The Righteous Brothers thing, that’s probably the guy I would want to do it with. He was a friend of mine first, which is a real good thing. We sat around a piano and sang a few songs. The cool thing was, he was a big fan of Bobby Hatfield. It went together real smooth. You can’t replace Bobby Hatfield. He is one of a kind. Bucky is doing a great job filling in.”

The Righteous Brothers were born at a club in Orange County, California.

“It was very white in those days,” Medley said. “That was back when Bobby and I were 20. We were working in a nightclub, and we were called The Paramours.”

The El Toro Marine Air Station was also in town.

“A lot of the black Marines heard these two guys down at the club singing rhythm and blues,” Medley said. “There was a saying that if you had a real nice car, it was a ‘righteous’ car, which meant ‘good.’ If they liked you as a friend, the black Marines would call you, ‘Brother, hey, brother, how you doin’?’ So they started calling us ‘righteous brothers.’ We recorded a song called ‘Little Latin Lupe Lu’ [written by Medley]. We needed a name, and Bobby said, ‘Let’s use the name the Marines have been calling us.’ So we did, and we’re still here.”

That was 1963. Late the next year, they recorded a song with producer Phil Spector that some say is the greatest pop record ever made and the best expression of Spector’s “wall of sound” production technique: “You’ve Lost That Loving Feeling.” It went to No. 1 in the U.S. and United Kingdom. More hits followed: “Unchained Melody,” “Ebb Tide,” “Just Once in My Life” and “Soul and Inspiration.”

In 1968, the duo broke up to pursue solo careers, but they re-formed in 1974 for two years, breaking up again in 1976. They had occasional reunions, and in 1987, Medley scored a Grammy in a duet with Jennifer Warnes for the song “(I’ve Had) The Time of My Life,” which appeared on the Dirty Dancing soundtrack. The year before, “You’ve Lost That Loving Feeling” appeared in Top Gun, and in 1990, “Unchained Melody” was featured in Ghost.

“It’s been a long, amazing journey,” he said. “You have to really love it. You have to really want to do it, and you have to love the music. You have to take care of yourself. That’s the main thing. If you’re a singer, it’s not good to smoke or do a lot of drinking. You just have to behave yourself. I don’t have any trouble doing that. The more you use your voice, the stronger it gets because it’s a muscle. We’re doing every Tuesday, Wednesday and Thursday in Las Vegas. We’re off for the summer, but we do about 30 weeks at Harrah’s that really keeps us going.”

Has he always behaved himself? Medley laughed before saying, “I’m a pretty normal guy. When it first happened back in ’64, ’65, it starts coming at you pretty fast. Bobby and I were just a couple of Orange County guys that loved to sing rock ’n’ roll. All of a sudden you become successful, and it’s pretty hard to screw your brain around. It happens overnight. Girls you wouldn’t dream of talking to are now wanting to talk to you. They’re paying you more money than they should and all of that. It probably took me about a year to get used to all of that. Then I finally decided, OK, I get it. You really have to make a conscious decision that I want to do this for a long time. As long as the people want to come out and hear those songs, we’re going to be here.”