In 1944, Wayne and Dorothy Ault were celebrating their wedding in Oklahoma over glasses of punch from a hand-carved ice bowl. They’re still celebrating that day, but this time in Sister Bay with bowls of soup across a table filled with cards congratulating them on 70 years together.

The couple usually gets cake, but this year was the “Soup Anniversary” for the Aults, whose three daughters packed their pantry with canned food as an anniversary gift.

“I think we have enough to make it another 70 years,” Dorothy said, laughing. 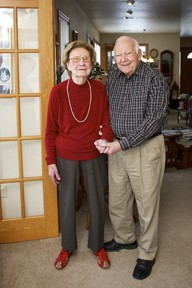 The Aults at their Sister Bay home. Photo by Len Villano.

The Aults, both 93 years old, have maintained their relationship through three children, seven homes and countless moments of tears, laughter, frustration and joy. Even so, they are shy about dispensing advice to new couples.

Wayne started with guidance on finding a partner.

“I think instead of finding a bar room, you find a good church,” Wayne said. He referenced the Peninsula Pulse’s Manners Matter column from Jan. 24, 2014, where the writer asked Mary Pat for advice after being turned down at a bar. Mary Pat also suggested the person try a different venue for finding dates.

Dorothy had insight into treating a partner once a relationship has started.

“I think you have to be considerate of the other person,” she said. “You have to have certain rules that you follow… [Don’t be] demanding or argumentative.”

Once couples start tallying their relationships in decades instead of months, the Aults’ advice changes. Adjusting to new challenges and situations becomes vital to keeping relationships strong.

A photo of the Aults while they were dating. Submitted.

“As we get older situations change,” Wayne said. “We have one of the best examples of that. Dorothy lost her eyesight. She has macular degeneration in both eyes. She was a big bowler and one night she was coming home from bowling and suddenly realized she couldn’t see out of one of her two eyes…

“We’ve been dealing with that right along. For example, I’ll get emails and bring them out here and read them to her. She can’t read anymore, can’t read music anymore. I think it’s adaptation – you’ve got to adapt to whatever the situation might be.”

I’m a guy who has been falling. You lose your balance, so you have to work around that a little bit.”

“You don’t like it, but you have to accept it,” Dorothy said.

Relationship advice doesn’t have to be put into words. The example Wayne and Dorothy set for their three daughters Judith, Jayne and Anita spoke volumes.

“They taught us that a good relationship is built on equal partnership, and that if both partners do good, meaningful work, that builds a stronger bond,” said Judith Jackson, the Aults’ oldest daughter. Jackson is a Peninsula Music Festival performer and coordinator. 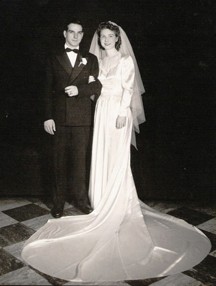 “Both of them accepted challenges and were creative in the process of their careers,” Jackson said. “They came together around family, sharing family vacations, activities at home, activities through the church. We saw them with a strong group of friends… We saw how that bond of friendship builds a good community. We saw a real strong faith base in terms of how they responded to the church.”

Wayne and Dorothy first met at a Calvary Baptist church in Washington, D.C., where Wayne was working in a Naval research lab and Dorothy was working for a congressperson from her home state, Oklahoma.

“She played the piano and she was in the choir, and boy that just sort of got me going, you know?” Wayne said. “She liked me too.”

When she wasn’t working, Dorothy put on church and social functions for people in the service.

“I had gone to a girls college, and I didn’t have any dates at all,” Dorothy said. “You went to Washington, D.C., and you got as many dates as you want. I had all the dating that I wanted, and here comes Wayne, one of the group.” 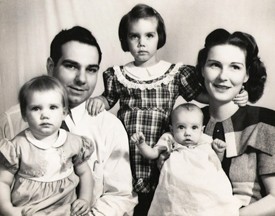 The Aults and their three children, Judith (center), Jayne (left) and Anita (right).

Wayne went to a party at Dorothy’s house, and said they started talking on the way over. Jackson added another detail:

“My dad, being somewhat naïve, thought she was asking him out for a date and singling him out,” she said. “He kept hanging around as people were leaving; he sort of lingered back thinking they’d be able to spend some time together as a couple. It took a little while to get that sorted out. I guess he persevered, and a short time later they were married.”

The Aults started dating three weeks after they met. The marriage came soon after, on Feb. 6, 1944.

“He was good looking, he was in uniform, and I was ready to get married,” Dorothy said. “Wayne was, too.”

After World War II, the couple moved around the Midwest. Dorothy worked as a middle school choir teacher and Wayne worked with a fire protection engineering company. They raised children, went to church, volunteered, sailed the Great Lakes and went on many family road trips, always taking the back roads to avoid the tolls.

They celebrated 50, 60 and now 70 years together, and are still caring for each other over every glass of punch and bowl of soup.