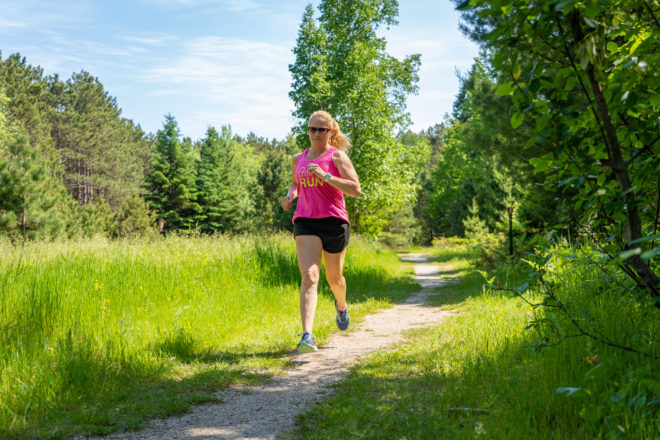 Though her fellow coaches used to call her a “fair weather runner,” Hasenjager has now run in everything from thunderstorms to 100 degree heat. Photo by Rachel Lukas.

Tanya Hasenjager has run every day for the past two years

When the pandemic started, some people took up knitting or doing puzzles or making bread. Tanya Hasenjager ran.

Inspired by a Facebook group called Runner’s World Run Streak, she started – and has continued – running at least a mile every day since June 1, 2020.

After competing in basketball and track in high school, Hasenjager played basketball in college, and the track coach there saw her on the court.

“[He] said, ‘You’re gonna run track.’ I said, ‘Nope, not gonna do that,’” she said. “Then by the time I was done with college, I no longer played basketball ’cause it just didn’t fit in my schedule – and I was a track person.”

The former sprinter and long jumper started running long distances because there were no jumping and sprinting events that she could find after college. Hasenjager set a goal to run a 5K – a goal she achieved when she and her family moved to Door County 12 years ago. After that, she kept it up, at least sporadically.

But it wasn’t until the pandemic started that running became part of her daily routine.

“It was just a ‘Hey, let’s see how many days in a row can I run,’” she said. “Then it almost became a game as to, can I get another day? Can I get another week? My husband asked me how long I’m gonna do this, and I said, ‘Well, until I get injured,’ and he said, ‘I don’t like that sound.’ In my mind, I’m too much of a competitor to just be done.”

Indeed, Hasenjager said she wants to “get the comma” by reaching 1,000 days.

“It gets me going in the morning; it keeps me motivated throughout the rest of the day,” she said. “I just have a clearer mind, and when I’m frustrated, I can get some things out.”

Though Hasenjager typically runs near her house, whenever she’s out of town, she finds a way to run wherever she is. Sometimes it’s making sure the hotel has a workout room, or jogging around trails or a couple of blocks if it’s safe.

In addition to her running, Hasenjager has been coaching for 25 years. She coaches sprinting and long jumping at Sevastopol, where she’s also the band director, and this year, she’s taking on coaching middle school cross-county as well.

It’s an interesting experience for her, she said, because she’s stopped setting paces and distances for her own running – that had just become frustrating.

“I try to step back from that and let myself just enjoy the run,” Hasenjager said. “I tried to step back these last couple of years and enjoy the fact that my body’s capable of what I’m doing.”

In reality, it takes her only about eight minutes to run a mile on a good day, and 10 minutes on a “bad” one. When she moved to her current home, she mapped out routes: a one-mile route, a two-mile route, a three-mile route and longer, which allow her to choose the option that fits with how she’s feeling.

Whenever Hasenjager has days when she doesn’t want to do her run, she pushes through, knowing she’ll be disappointed the next day if she doesn’t. As of this publishing, she’d run more than 1,600 miles for 754 days straight. It’s a noteworthy accomplishment, but one she believes anyone can achieve with their activity of choice.