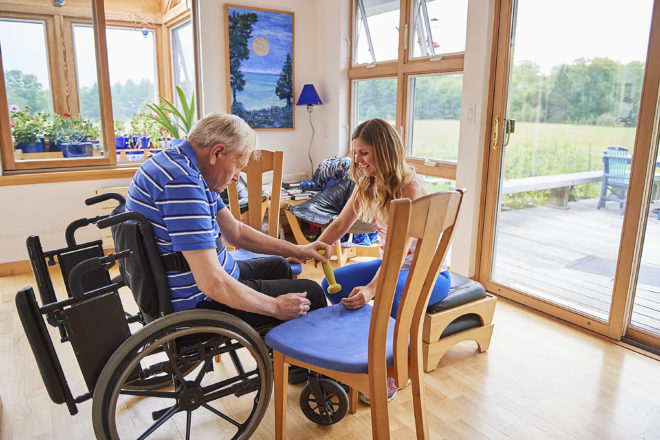 This story starts with a woman who walked into a bar. It ends with a new event in Sister Bay and a stronger community. In the middle of it all is Ashley Lusk.

Lusk, a 33-year-old personal trainer, was sitting next to Steve “Barney” Willems one night at the Sister Bay Bowl. Both avid runners, they compared routes. As the conversation continued, Lusk learned that she and Willems had another thing in common: Both had turned to running as a way to cope with depression after suffering physical traumas – his, a traumatic car accident decades earlier; hers, a cancer diagnosis.

Willems’ story and positive attitude inspired Lusk, and as she talked later with Barney’s niece, who was tending bar that night, they came up with the idea for a fun run to honor him. The third annual Barney Fun Run and Walk took place in April 2019, and Lusk said she’ll keep organizing the running events for as long as Willems wants.

“You see gaps that can be filled, and you just go for it,” Lusk said.

After only a short conversation with Lusk, it’s obvious that “going for it” is what sets her apart.

Lusk was born and raised in Dyckesville, Wisconsin, the youngest of nine children. Her parents and some siblings struggled with weight, and she said seeing how that affected their lives was her early inspiration to become a personal trainer. She studied personal training in Arizona and worked there and in Hawaii for a while, but it was her own struggle that jump-started her fitness career here in Door County.

Lusk had moved back to the peninsula in 2009. The first summer she was back – then age 22 – she was diagnosed with tongue cancer. She had surgery to remove the cancer, but the emotional impact of the experience stayed with her.

“I learned that anything can happen,” Lusk said. “Nothing in life is guaranteed.”

She turned to exercise and running to help manage her anxiety, and when a friend told her about the LIVESTRONG program for cancer survivors at the YMCA, she applied to be an instructor.

“I could really empathize with the people and really understand what they were feeling and going through,” Lusk said. “Showing other people how to incorporate that into their lives and live a little bit healthier was just awesome. I knew as soon as I started doing those classes that I was back where I belonged.”

Lusk’s business, Homebody Personal Training, was born. Eght years later, she trains about 30 clients a week, splitting her time among Door County Fitness Studio, Scandia Village and clients’ homes. Most of her clients are older adults and people who are recovering from surgery. She focuses on helping them improve their range of motion and balance – all in keeping with her goal of improving people’s quality of life through exercise.

Sue and Jack Anderson would say she’s done just that.

“We certainly have more flexibility,” Sue said. “I think we’re steadier on our feet. I walk better.”

Sue, 77, and Jack, 86, have been working out with Lusk for five years. She goes to the couple’s Gills Rock home twice a week, and while the Andersons lift weights, Lusk lifts their dog so that she can work out along with them. Lusk helped Sue recover after a shoulder injury, and the couple has referred several friends to her. But the physical results of the Andersons’ training are just part of the equation.

There was a fondness in Sue’s voice as she told me how much they enjoy talking to Lusk during their workouts and how she and Jack like to translate their funny generational expressions for her.

When I asked what working with Lusk has given her, Sue answered, “A positive attitude. A sense of well-being. She just makes you happy to be around her.”

It was Lusk’s work in clients’ homes that sparked another project. She said that often, after she’d finished clients’ workouts, they would ask if she could quickly help them with something in the house or yard or on the computer.

“There are so many elderly members of our community who would like to stay in their homes for as long as possible but cannot keep up with the maintenance,” Lusk said.

Given the housing shortage in the county, she thought she could create a win-win situation by pairing younger people in need of housing with older homeowners who may be interested in renting out a room – possibly in exchange for doing yard work, running errands or helping in other ways.

After a year of researching homesharing programs, Lusk launched the Door County Homesharing website in June. It includes applications for people seeking homes and those interested in providing rooms. At this point, Lusk reviews the applications herself and requests a nominal fee to cover applicants’ background checks. It’s still getting started, but she’s received several applications and hopes that interest will grow once some successful matches are made and people see that the homesharing concept works.

Although Lusk’s work as a personal trainer strengthens individual clients, it’s clear that her passion to help also strengthens the entire community.