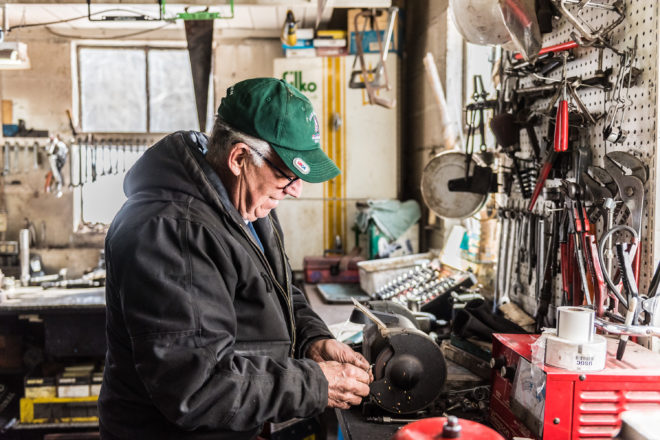 Sixty years of work is enough for any man.

“Time to get out,” said 81-year-old Ken Gobel – or Kenny, as everyone seems to know him – just a week before he handed over the keys of his Ellison Bay full-service gas station to new owners Vaughn and Jorrie Simmons.

When he steps away from the gas station at the close of day March 29, Kenny will have 42½ years in as the last place to buy gas in Northern Door, and one of the only remaining full-service gas stations anywhere.

“I worked with my father at Sister Bay Motors for 18 years,” he said. “He sold the garage and this was for sale. I bought this and I’ve been here ever since. Sixty years all together. It’s been a nice business. I enjoyed every day of it. It’s a nice spot here. Easy to get in and out for pumps. Boaters like it. It was a good business.”

In the beginning it was a family affair. 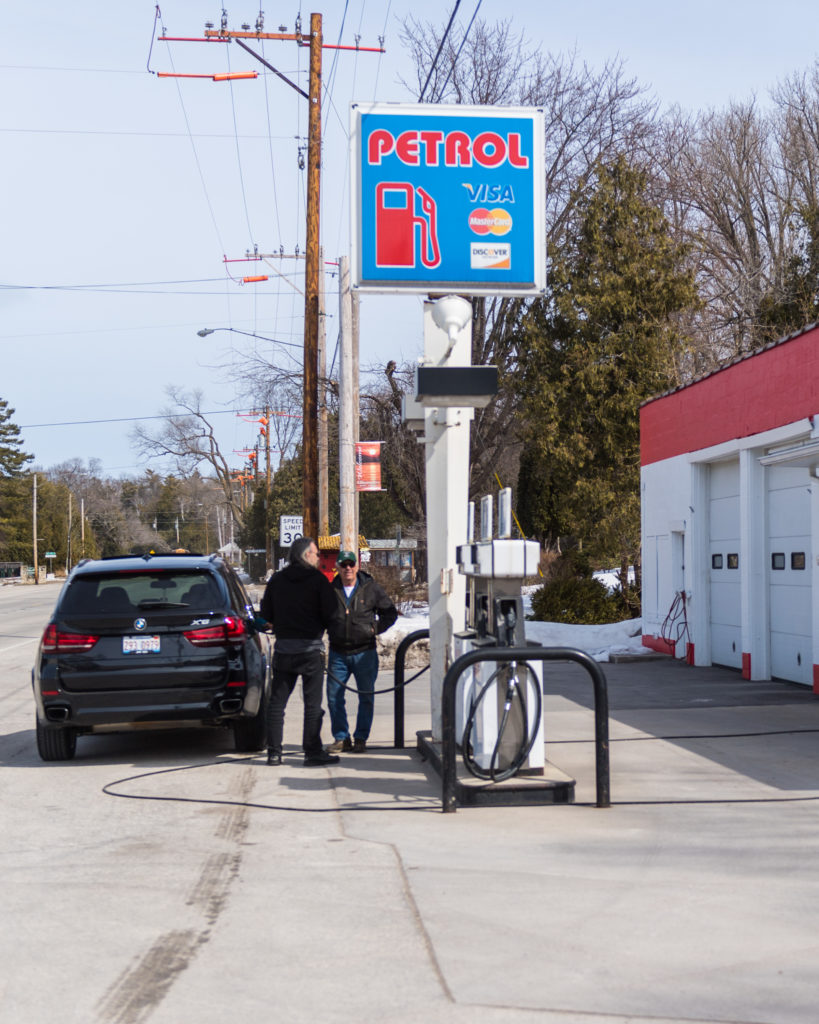 “When I first bought it, I had two gas boys, two mechanics, myself and my wife,” Kenny said. “My wife died on me. My son worked with me for a while. My brother-in-law worked for me for a while, but he died too.”

He’s kept the business going year round by himself the last few years, including repair work, although he admits he hasn’t taken anything beyond tire and brake work in recent years.

“I haven’t hired help the last couple years,” he said. “I did have help, but I had trouble with a couple gas boys. They were kinda light-fingered and I had to get rid of them.”

Same thing with the customers and the tackle he used to hang on pegboards.

“I used to have a lot of fishing tackle, but when I’m here by myself, a lot of it was walking out the door,” he said. “We had fishing nets and coolers. We had all that stuff.”

When he bought the place, it was a Mobil station, and then became Marathon until about eight years ago when Kenny decided to go independent.

“I wasn’t liking the deal I was getting from Marathon,” he said. “I’m happier being independent. I went with Country Visions Co-op. They are wonderful people to deal with. I have no problem with them.” 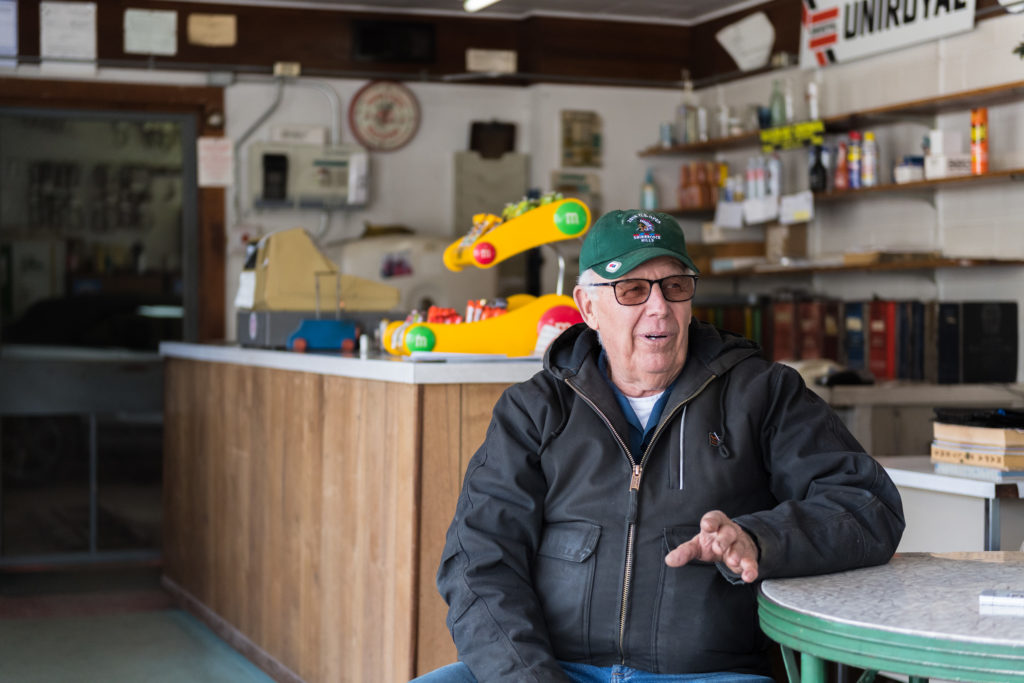 And the decidedly British sign prominently displayed above the pumps reading Petrol?

“When I got rid of Marathon I put my own sign up,” Kenny said. “I thought Petrol would be a good name for a gas station.”

Asked what changes he has seen in his four decades on Highway 42, he said, “Ellison Bay is a nice quiet town. It’s moving along a little bit but not extreme like some of the other ones.”

And then, as if on cue, “Ding, Ding, Ding” announces a customer has arrived and Ken, belying his 81 years, makes a beeline for the door and pumps gas for a man headed to Washington Island to buy a hotel from a man who has owned it for 42 years. It’s the sort of odd connection Kenny has been making with customers for 42½ years.

You have to wonder what people think when they pull into his station and find out someone will pump their gas for them.

“They can’t believe it. ‘I don’t know what to do,’ they say,” Kenny said. “I just say, ‘Sit in the car and tell me what you want.’ In the summer we do the windshield and check the oil if they want. Wintertime you can’t wash windows. It’s too cold.”

It must be asked – will you miss it?

“I will miss it for a while, but I’m just one mile up the road,” Kenny said. “I have four acres of grass to cut. I like to play golf and so look forward to playing a lot of golf this summer. I have to go up to Eagle River to see my sister. She wants to go down to Florida to see her son. We’ve got things to do and now I can do them. Gotta do them before it’s too late. Still feel good, but don’t want to wait until I have one foot in the grave.”

Despite being well past what most people think of as retirement age, Kenny said he hadn’t thought about it much in the past.

“But I thought it was getting time. It’s been for sale three years.”

“Couple people were looking, but one wanted to lowball me and I didn’t want to go with him,” Kenny said.

But he was comfortable selling to the Simmons.

“I’ve known them,” Kenny said. “He graduated from Gibraltar High School. She was brought up in Chicago. He moved to Boston, building high rises.”

But he only skims the surface of what owning this business means to childhood sweethearts Vaughn and Jorrie Simmons, who have known each other since 1979.

“I’m from Ellison Bay. Jorrie summered here ever since she was a baby. We’ve known each other since she was 12 years old,” Vaughn said. “There was a phone booth right next to this gas station. That’s where we would meet every single night. When Jorrie was back home in Chicago, I would wait for her to call me, and it would be a collect call so she wouldn’t get in trouble for a long distance bill.”

Vaughn was gassing up at Kenny’s last November when Kenny revealed that if the station didn’t sell soon, he’d have to close it up.

“We always knew we were going to come back here,” Vaughn said. “I went home and talked to Jorrie and wheels started turning.”

Home at the time was south Boston. He was working on a big, high-stress project in north Boston.

“The commute home at night was almost three hours,” he said. “One day I came home from work and said, ‘Jorrie, I’ve had enough.’ She wanted to buy the station as soon as she heard it was for sale.”

“At Thanksgiving I was like, let’s do it,” Jorrie said. 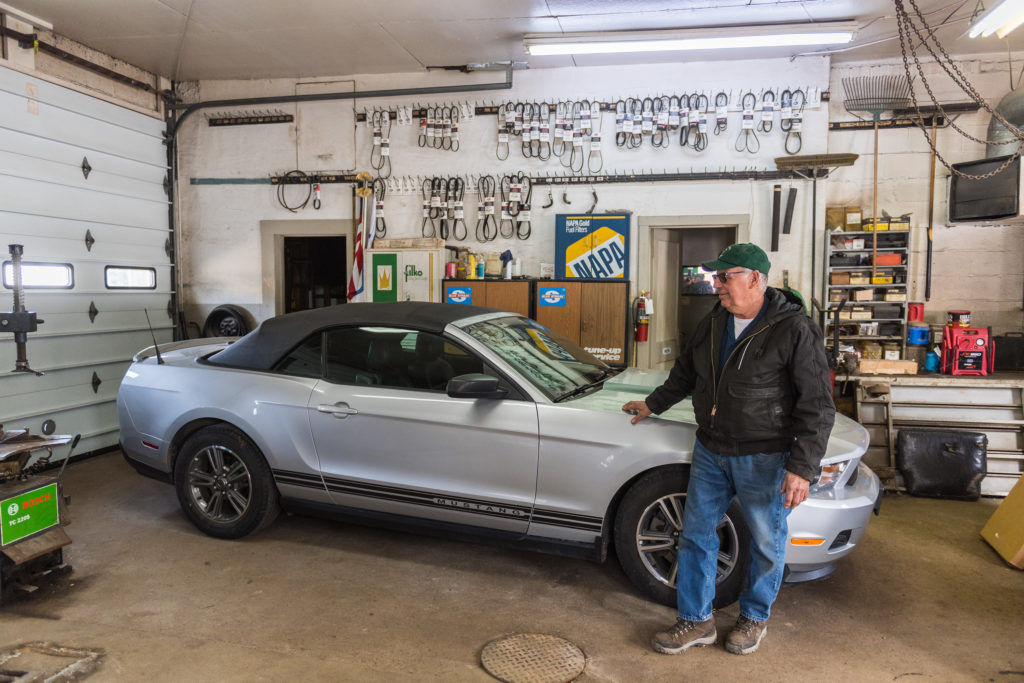 “We’re kind of young to be fully retired, so it’s an opportunity to work and have a business,” Vaughn said.

There will be some changes, including a name change. Beginning Saturday, March 30, the station will be known as The Last Stop, with a sign by local artist Cody Leist.

“We couldn’t come up with what we were looking for,” Vaughn said. “We met with this kid and he had some great ideas and his work is wonderful.”

But Jorrie adds, “We want to keep it as much as how Kenny had it.”

They plan to update the pumps with an automatic pay-at-the-pump system for when the station is closed.

“We’re still going to provide full service,” Vaughn said “Every customer that’s come in, first thing they ask, are you still going to pump the gas? Yes we are. The service is going to stay pretty much the same, but we will have computer diagnostics for the newer vehicles. We’re hiring an ASE certified technician.”

“We’ll do a couple of electric car chargers in the back,” Jorrie added.

“The community has asked if we will do that,” Vaughn said.

They also have plans for a live well for bait and other fishing supplies, baked goods and coffee, and a small deli serving sandwiches. A refurbished 1929 gas pump will also be on display.

“We want to keep the nostalgic look with the town, just how we grew up, how Kenny had it. We’re going to incorporate some things he’s leaving behind,” Jorrie said. “We’re very excited. We want to give back to the community what the community gave to us growing up here.”

A celebration is planned for Kenny Gobel at the Mink River Basin on April 14.