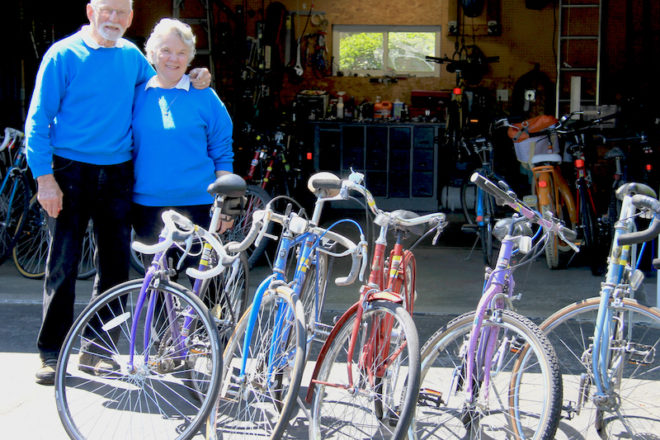 When Ken “The Bike Man” Hollenbeck retires from his volunteer post with Door County’s BRIDGES Bike Program this fall, he’ll leave behind a huge void. For 23 years, he’s been servicing and delivering bikes to the many J-1 international students who come to work in the county for each summer season.

This year Ken has reached the “bold and advanced age of 88” and has made the decision to retire from the program.

Every spring, hundreds of J-1 students travel from around the globe to work in Door County for the season, yet upon arriving, they have no transportation. The lack of public transit is evident to us all, but for those traveling from abroad, it is an especially large hurdle.

Since 1996, Ken and the BRIDGES of Friendship to International Students Program – now supported by eight area churches – have helped to solve that problem by collecting used and donated bikes to assign to these young workers, who use the bikes during the season to get to and from work, go shopping and navigate their new summer home.

Unfortunately, without Ken or new volunteers, the program will cease to exist after this fall: the word has gone out, but there is no replacement yet to fill his role.

“We can’t find anyone to take my place – that’s the problem,” Ken said. “They can’t find a number of people to take his place,” Janet Hollenbeck was quick to add, hinting that for people who are not Ken “The Bike Man,” this position would require multiple people. In this way, Ken may actually be irreplaceable: the best replacement candidate would need to have the in-depth experience and broad knowledge that Ken has.

“I’m kind of a do-it-yourself, handy guy,” Ken said. “I grew up on a farm in New York state, so you learn to fix everything on a farm. I worked a couple years with my dad as a mechanic for a farm-equipment dealer and joined the Navy, went to electronics school. So I know the mechanical and electrical part. And then I worked for the government for 27 years in maintenance management.”

After meeting Ken, though, I have a feeling that his endearing “Bike Man” nickname is less likely to be a direct result of his handyman skills and more likely to be a byproduct of his ability to put a new Door County resident at ease and create a lasting impression.

“I’ve learned how to say hello in about 10 to 12 languages,” Ken said proudly. “[On a bike delivery,] the first thing I do is ask the student, ‘Where are you from?’ And they say, ‘Romania!’ And I say, ‘Salud!’ And – big smile – just like that, it’s instant rapport with the kids. [Janet] greets them with a universal language: she gives ’em a hug. And every one of them seem to appreciate it.”

Janet, Ken’s now-wife (they married last summer), is part of what they call Team KJH. They are the two-person crew that shows up to present the worker with her or his bike for the summer. Janet records the necessary data to keep track of the bike, and Ken adjusts the bike to fit each individual comfortably.

“If they are comfortable on the bike, they’ll ride it more safely,” Ken said. “My primary concern for the bike program is the safety of the kids riding. To that end, we take at least a three-fold approach.”

He detailed what each student receives as part of the bike set-up: first, a bike has been given a full tune-up and test; second, it’s adjusted to suit the rider; and finally, there’s a safety lesson to accompany ample bike reflectors, lights for riding at night and an extra-visible arm band.

Last year Team KJH delivered 273 bikes, and this year it’s set to break 300. The process begins in March with tuning up all the bikes that survived the prior year.

“We start in March getting them ready,” Ken said. “Middle of May, kids start coming in droves, which turns us from a ‘get the bikes ready’ program to a delivery program.”

The large – and growing – time commitment is perhaps the primary reason for Ken’s retirement. His tune-up process for each bike most often takes around an hour, and on an average day, he gets four to five bikes completed. That’s 60 – or more – tune-up days each spring for the nearly 300 requested bikes.

In addition to providing bikes, the BRIDGES program supports visiting students in other ways: offering free social events every two weeks – kayaking, boating, swimming or talent shows – and an end-of-the-year golf outing with an American-style Thanksgiving dinner. Ken and Janet plan to stay involved in these portions of the organization because the bonds they make with the participants are dear to them.

Ken’s other hobby is playing ping-pong. Over the years, he’s challenged many students to a match at this home, which often turns into an evening of games and a shared meal. “We’ve had return students show up at our door the following year, saying ‘We’re back!’ One young man couldn’t believe he had lost a game to an 85-year-old. I said, ‘Well, come back next year, and you can lose to an 86-year-old!”

It’s clear that Ken “The Bike Man” goes well above and beyond bikes by sharing his time, his knowledge and his home. He has made it a priority to make sure the visiting students feel welcome and comfortable in Door County.

If you would like to follow in Ken’s tire tracks by supporting BRIDGES, visit dcbridges.org to volunteer or donate. And by all means, if you or someone you know has the potential to become another “bike man,” Team KJH would love to pass the bike wrench.