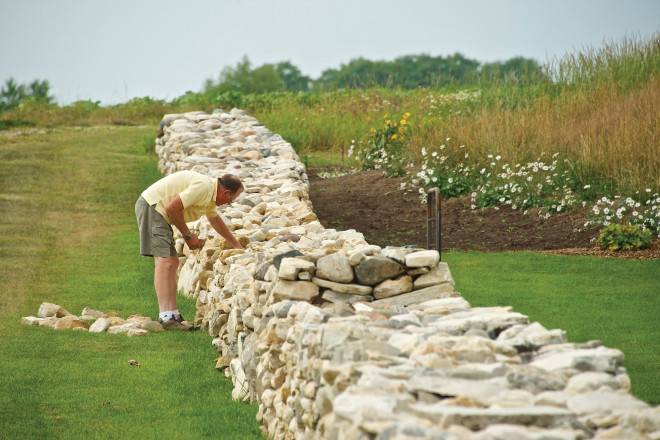 Ken Birnschein doesn’t know exactly what made him begin, but he can point out the very first rock he laid in his three-year quest to build a stone wall at his home on Nelson Road near Valmy. By the time the last stone was laid in 2012, Ken had built a 260-foot-long wall and something akin to minor fame in his neck of the woods. But he didn’t do it to be recognized. “Something told me to move that first rock, and then there was no stopping me,” he says.

The wall is a work of art: thousands of stones fit together like puzzle pieces, and no mortar. Framing the picture-perfect homestead that Ken and his wife Liz lovingly maintain, the pale golden color of the limestone wall glows in evening light, and its top layer glitters with more unusual specimens. “I put all the pretty ones on top,” says Ken. There’s also an iron gate and spectacular eight-foot arch, the frame of which was welded by Ken, who spent 25 years at Peterson Builders in Sturgeon Bay. 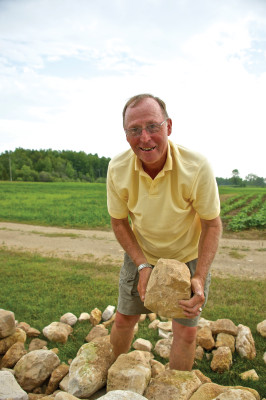 Like many Door County kids, Ken Birnschein grew up picking stones from the rocky fields of the peninsula. “Dad bought a cherry orchard, and, oh, we picked stones,” he says. “There were 40 acres and we got a buck a load.”

But although Ken grew up surrounded by the stone walls that border Door County’s fields, he never considered building a wall until he began researching a trip to Ireland, a lifelong dream he shared with Liz.

“What our dads created in those stone walls was a way to clear the fields and get rid of the stones,” he says. “They were full of moss and always falling apart.”

But when Ken and Liz finally visited Ireland in 2010, they saw the possibilities. “Those walls were so beautiful, they just took our breath away,” says Liz.

Ken finished the first section of wall in September of 2010 after working on it since the spring.  At the foot of the gated section of the wall, there is a stone inscribed with the words “Ken’s Therapy 10-12.”

Finding himself at loose ends after retiring from his job as a bus driver in Sturgeon Bay, Ken found that building the wall gave him purpose – one he pursued with a single-minded drive. “Sometimes I’d work myself so hard that I wouldn’t even sit down,” he says. But the project didn’t stop there.

After exhausting his own supply of rocks, Ken quickly found that his neighbors had plenty to spare. “John Bagnall gave me some of the early stones, and we got more from my classmate Terry Junion, Lucas Long over on Highway 57, Kevin Wilke on 42 and Mike and Jamie Henschel, too.”

And it wasn’t just neighbors taking an interest in the wall. “People just kept coming by,” says Liz, who helps Ken maintain a log of the hundreds of visitors who have made a pilgrimage to the wall. “They would stop their cars while Ken was working, or call us to see if they could come visit.” 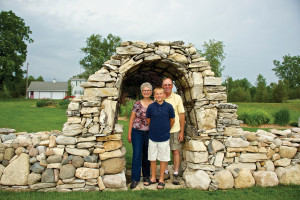 Encouragement from visitors, neighbors and family encouraged Ken to continue the project. “We’ve got five grandchildren, with number six on the way,” says Ken. “The kids are part of it. When my grandson Micah was 4 ½ years old, he was out here helping. He had a stone and he knew just where he wanted to put it.”

Ken’s wall has become a geocaching spot that brings many families to the property, and the Birnscheins have struck up new friendships over the wall.

“One couple came by on Mother’s Day,” says Liz, “and they stayed so long we asked them to supper. I had to send Ken to the store to get two more pork chops.” The couples have since become good friends.

A recent land survey discovery attests to how Ken’s neighbors see the wall as his work of art. “Last year we had to put in a mound system,” explains Ken. “The surveyor put the stake in the ground three feet north of the wall – turns out the place I built it wasn’t even our property.”

John Bagnall, the Birnscheins immediate neighbor, was insistent that the property legally belongs to Ken. “He actually gave us that triangle of land,” marvels Ken. “He said ‘No, Ken, that’s your wall.’ It was really something.” 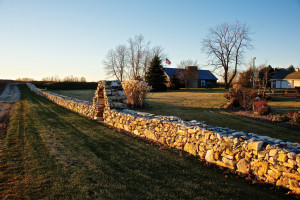 Visitors to the wall usually ask Ken the same few questions: “How many stones did you use?” “How many hours did it take?” and “Did you study to do this?” Ken doesn’t have answers for those. But what he will tell you, with a gleam in his eye, is how much building the wall has given him, as he points to one of his favorite entries in the guest book. “Thank you for adding beauty to our world,” it reads.

Ken agrees that he has developed some serious expertise in wall building, so much so that he even considered hiring out his services to help other stone wall owners make repairs. “I thought about dropping some leaflets down on Cottage Row. There are a lot of walls down there that could use some help.” But he thought twice, realizing he had plenty to do at home. The wall is complete, but it’s never finished. “Door County winters take their toll,” says Ken, pointing out a section of the wall where stones were heaved out by last winter’s frigid temperatures. “There’s always maintenance, but that’s OK.”

After leafing through his visitor notebook, Ken goes back into the house and brings out a framed piece of paper. “This was given to me by a couple of guys who used to come by and encourage me. Sometimes they’d leave me a cold beer, too.” Ken and Liz both get a little misty-eyed as they read the Robert Frost poem “A Time to Talk.” “I can’t believe that they did that for me,” says Ken.

Although Ken still doesn’t know what moved him to begin his project, he knows one thing for certain. “Building the wall, it changed me,” he says. “It saved me.”