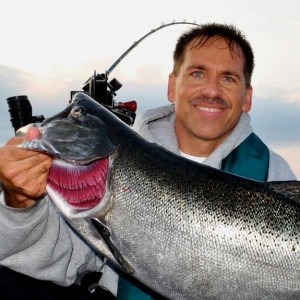 Nobody has covered the wildlife scene in the Door Peninsula area like Kevin Naze, and few are more passionate about keeping its traditions alive and its future sustainable.

As a writer and photographer, Naze has been chronicling hunting and fishing for 35 years. But he says outdoorsmen make a bigger impact with more direct action.

“I’ve taken more than 100 kids out on their first hunt, and hundreds more for their first fish,” he says. “That’s what I love to do, getting newcomers out there. Those of us who are most passionate about hunting and fishing have to take that responsibility. You can really pass it on.”

As a chronicler of the sport, Naze questions the alarmist rhetoric about the health of the Lake Michigan fishery.

“I’m a skeptic about a lot of things,” Naze says. “VHS [Viral Hemorrhagic Septicemia] was going to wipe out fish. Then gobies were going to ruin the whole fishery. Well, as we saw with the goby, the changes in the lakes aren’t always bad.”

That’s not to say he blows off warnings.

He still doesn’t eat fish from the Fox River, and he says, “I wouldn’t eat the oldest, fattest lake trout, but I give them to the old fishermen who’ve been eating them all their lives and they aren’t glowing in the dark.”

But to Naze, the rhetoric of regulators and media hype can blow the risks out of proportion.

“To some extent, research guys have to come up with something to justify their research grant,” he says. “For a decade people wouldn’t eat fish out of the lake because they said it would give you cancer, cause low birth-weight, and impair brain development. Well, my three kids have been eating fish from the lake all their lives, and not to brag, but they’re all pretty smart, healthy kids.”

He said he’s always smart about his preparation, removing the skin and fatty parts of the fish, where most of the toxins in a fish are found. As with everything else, he says it’s all about moderation.

“We don’t drink a lot of pop in our house, but we’ll have one every once in a while,” he says. “It’s always doom and gloom about the lake in the media. But I’m a glass half-full kind of guy, and I just think we’re so lucky to have this world-class fishery.”