The Kewaunee Academy of Fine Art offers students an alternative to art studies in an urban setting. The school opened in a barn near Kewaunee’s north side harbor in 2005; but this summer the academy relocated to a new setting, a historic dockside warehouse by the mouth of the Ahnapee River at Lake Michigan in downtown Algoma.

Owner Norma Bell and artistic director Craig Blietz hosted an opening reception for the school on August 28, and now invite the public to their official Grand Opening October 8 – 11 at 77 Steele Street. The event will be held in conjunction with the Northeast Wisconsin Art Studio Tour and will not only allow people to visit the school, but will feature nationally known artists giving demonstrations of techniques and presentations on their work. A complimentary figure drawing and painting session will also be available.

Norma and her then husband Dick Bell moved to Kewaunee from California in 2001 to open the Barnsite Art Studio and Gallery. Blietz’s relationship with the business dates back to the beginning of the venture. “Craig taught workshops at the Barnsite in 2002,” Norma Bell recalled, “right after we opened.”

When the Bells went their separate ways, Norma closed the gallery and began the school in the same space, which provided a large life drawing room, a north light area, and individual student studios. The new facility in Algoma offers an open concept with loft ambience.

“The philosophy of the old space,” Blietz said, “was one of private studios and specifically dedicated spaces pending function. The new space is an open floor plan with far more flexibility, and more square footage designed to better serve the student.”

While the 1903 Algoma building with its cork insulated walls originally functioned as a storage area for perishables being shipped from or to the village, Bell said, more recently it served as a workshop for the JAG sign painting company, with tracks to hold the billboards while they were being painted. “We took everything out,” Bell said, except for paint-spattered racks on the sides that they left as a tribute, rather like abstract murals. 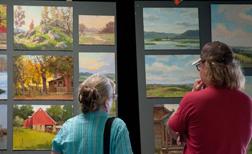 “The building looks the same on the outside,” Blietz said, pointing out that its exterior appearance is appropriate to the location in the village and the paint splatters left on the floor from the sign-painting business, fitting for an art school.

But while the physical structure seems compatible with the small town, some people might wonder whether the village is a good choice for an art school. Bell and Blietz have no reservations about the location of their academy.

“Students have chosen our school because of the size,” Bell said, “because they want a small school.”

“We have a young woman from the Minneapolis-St. Paul area that came here,” Blietz said, “rather than choosing from a number of schools there that she could have gone to.” When the school began, he continued, they were concerned where they would find students, having to compete with academies throughout the Midwest, the United States, Canada, and Europe. But they have drawn students from the Midwest and beyond. “We found over time that because we are different and located where we are, we have an asset – a reason for students to come here.”

As he has attended and taught at big city art academies, Blietz understands the pressures of urban living that art students may experience.

And while Algoma doesn’t have art museums, he pointed out the number of art collections in the state, and Bell noted that KAFA has offered trips for students to the Chicago Institute, the Hispanic Museum in New York, and (in collaboration with the Linden Gallery) painting trips to China.

In addition to the picturesque setting, students need not rely on an automobile but rather have the convenience of a short walk to be in the heart of the village which already has a couple of galleries and an arts community.

Both Bell and Blietz are quick to point out, though, that the faculty of an art institute is far more important than its location. At KAFA, Blietz said, “instructors are professional artists, but they must have teaching skills. We hire artists with genuine teaching abilities.” 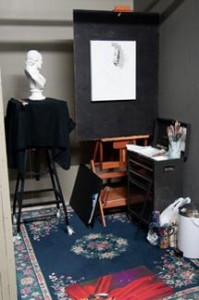 Instruction follows an atelier-based design. “During the last 15 – 20 years atelier training has proliferated throughout North America,” Blietz said, “a European model taken from the 19th century and earlier. We all have adapted and modified it to our own service.”

In a classic atelier, he explained, an artist opened his studio to a half-dozen students and offered them training in exchange for money, assistance or modeling service. KAFA has several instructors who do not have personal studio space at the school, but who work side by side with students demonstrating techniques and sometimes working on their own pieces.

As an academy, KAFA differs from the Peninsula Art School and The Clearing in Door County, and other institutions in Northeastern Wisconsin that offer workshops. Bell and Blietz saw a need for a school that presented sequential and sustained training, and as a result developed a three-year curriculum than culminates in a formal certificate of completion.

While the student body represents a spectrum of ages ranging from about 20 to 70, the median is somewhere in the 50s. While younger students hope for a primary career in art, Bell said, a number of older artists enrolled in the school are launching a second career, doing what they have always wanted to do.

And they succeed. “Our students have won regional and national awards,” Blietz said, “and have been published in art magazines.”

Some become teachers; one graduate opened her own school; a number are represented in galleries.

“What has happened,” he continued, “is former students of the academy have gone on to such success that the reputation of the school is that you have to be good to get in there!”

But Blietz and Bell do not want potential students to be intimidated. “The school accepts a student at any level,” Bell said, “and provides them with the opportunity to improve by working with a professional staff.”

The Kewaunee Academy is located at 77 Steele Street in Algoma, Wisconsin. For more information contact  the Academy at 920.487.7220 or http://www.kewauneeacademy.com.