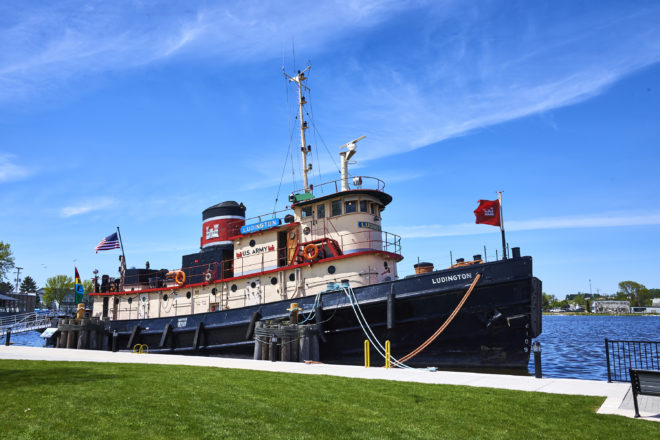 The City of Kewaunee paid homage to the illustrious wartime history of the Tug Ludington, which has been moored in its harbor for more than two decades.

Before it was the Ludington, it was known as the Major Wilbur Fr. Browder and served in the June 6, 1944, D-Day invasion by pulling ammunition barges across the English Channel to Normandy.

The Jacobson Shipyard in Oyster Bay, New York, built the Browder for the U.S. Army in 1943 at a cost of $396,400. It was one of eight seagoing tugs commissioned for wartime duties. Unlike the Ludington, the Browder was equipped with two 50-caliber machine guns mounted above the chartroom and pilothouse.

In 1947, the boat was transferred to the Army Corps of Engineers and renamed the Tug Ludington. It was stationed in Kewaunee and assisted in many construction and maintenance projects on the Great Lakes until its last sail in 1974.

The city acquired the Ludington from the Federal Surplus Program on Dec. 29, 1995. Through donations and the help of the city and volunteers, it was permanently moored and prepared for public tours. On March 28, 2002, the Secretary of the Interior placed the Major Wilbur Fr. Browder/Tug Ludington on the National and State Registers of Historic Places.The Tug Ludington is open for tours on Saturdays and Sundays, 10 am – 4 pm, from Memorial Day until Labor Day.