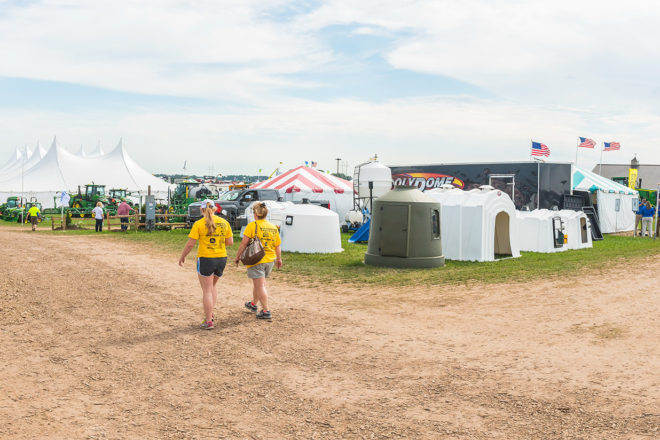 After three days, the Executive Committee for Kewaunee County Farm Technology Days 2017 is proud to report the event at Ebert Enterprises was an overall success.

Kewaunee County is the first to host Wisconsin Farm Technology Days and have more individuals attend the three-day event than the county’s total population, as far as records show. In the first two days alone, the show nearly attracted the number of the county’s residents.

Additionally, organizers were excited to learn the first day of the show attracted more than 10,000 visitors, the highest attendance on day one in several years. The official opening ceremony had a record-breaking 550 attendees, including Governor Scott Walker and Department of Agriculture, Trade and Consumer Protection Secretary Ben Brancel.

Along with welcoming visitors, vendors, exhibitors and people from across the Midwest, there were a number of interesting stories to come out of the week.

Executive Committee chair Amber Hewett and host farm owners Randy and Renee Ebert have expressed their overall satisfaction with how the show went this week. They are excited to learn new friends were made and the grounds were a true place of networking and connection for those involved and interested in agriculture.

For more information, visit wifarmtechnologydays.com/kewaunee or find them on Facebook.