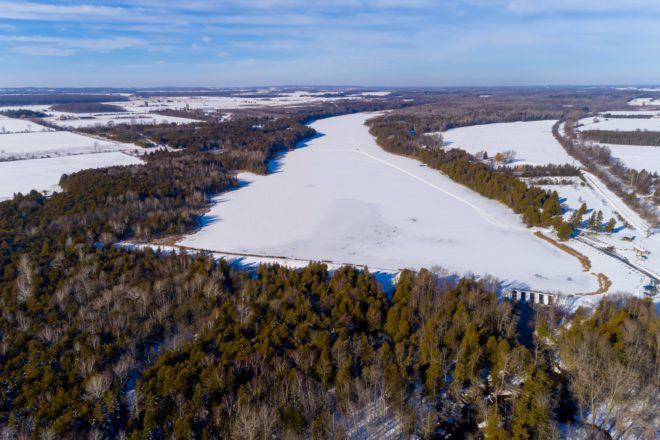 The Forestville millpond from a drone’s-eye view. Photo by Brett Kosmider.

It was standing room only in the conference room at the Luxemburg Fairgrounds building on March 12 when the Kewaunee County Land & Water Conservation Committee held its monthly meeting – one that included a presentation by Door County Conservationist Erin Hanson on the proposed Forestville Millpond drawdown.

Most of the attendees cleared out of the meeting room after Hanson’s presentation, but they gathered outside the room to discuss the proposed drawdown further. A number of Forestville residents were in attendance, including village President Terry McNulty and village board member Lora Jorgensen. Both are vocal opponents of the drawdown.

During the public-comment period that preceded Hanson’s presentation, both spoke against the drawdown.

“This is something I feel is not good for Forestville,” McNulty told the committee, adding that many questions and concerns have not been answered and that people downstream of the millpond and dam – Kewaunee County residents – were not considered stakeholders when Door County was gathering information on how to proceed with a cleanup of the millpond, which has one to two feet of muck on its bottom.

“It’s just going to be shipped downstream,” McNulty said of the sediment.

Jorgenson – who, in addition to being a village trustee, identified herself as a founding member of the Friends of Forestville Dam and a member of the Clean Water Action Council – said Door County had many options for cleaning the millpond, “but the cheapest and easiest option won out: flushing the toilet.”

She said the millpond acts as a catch basin for agricultural contaminants, not only from Door County farmers but also from industrial dairy operations in Kewaunee County that haul manure to spread on land rented in southern Door County.

“We urge you to request a hold on the drawdown and request that a working group be assembled with those who are truly affected,” she told the committee.

Millpond resident Robert Sijgers told the committee that the drawdown doesn’t address the source of pollution, which is agricultural runoff. He suggested that independent monitoring of the water should be conducted during the drawdown.

Door County Supervisor Ken Fisher, who also chairs the Door County Land Conservation Committee, said he learned from the Forestville town chair [although he did not name him, that would be his fellow county board supervisor Roy Englebert] that of the five members of the Village of Forestville board, McNulty and Jorgenson are the only two who oppose the drawdown. “She’s got an agenda,” Fisher said of Jorgenson.

Fisher said the county’s decision on the drawdown “has been open and above board” and has relied on the conclusions of experts on staff. He also said the DNR had identified removing the Forestville dam as the best option, which prompted Sijgers to rise and say he has it in writing that the DNR never made that recommendation. He was asked to sit down because he had already had his three minutes of speaking.

Nine Kewaunee County residents also spoke, some aligning the millpond pollution to the ongoing well contamination in the county, and several used their time to give a tongue lashing to the committee members and the Kewaunee County Board for ignoring the “crackpots” who have been saying all along that cow manure is the root cause of the problem, as was identified in a recent report by USDA microbiologist Mark Borchardt. (Borchardt will discuss his study at the next meeting of the Kewaunee County committee on April 9.)

Those speakers included Lynda Cochart from the Town of Lincoln, who talked about the stress of not being able to use her well water and having to carry in water for years.

Jody Parins of Lincoln is the one who pointed out that “now Dr. Borchardt has confirmed what those ‘crackpots’ alerted you to five years ago.”

“No home in Lincoln Township is safe,” she said, and accused the committee and county board of blowing off anyone who complained rather than taking them seriously. She asked for “no more acquiescing” to the Dairy Business Association and asked that “concrete, aggressive steps” be taken to resolve the issue of contaminated water.

Arlin and Mary Lou Karnopp of Ellisville took photos of their front yard, showing a brown pond of manure runoff from neighboring Rolling Hills Dairy. Arlin said the brown pond is frozen now, but when it melts, it will flow into the East Twin River that runs near his home.

“This is not how we should be living,” Mary Lou said. “We lost the value in our house, and everybody says, ‘It’s not our fault’ and ‘What do you want us to do about it?’ I want it to stop.”

Dick Swanson of Algoma said the millpond pollution is an easy fix. “If you want to stop this pollution, stop renting your land for spreading manure. Stop it, and it will clean up tomorrow.”

Nancy Utesch said that whenever complaints are made about the dairy industry, those people are called anti-farming, and they don’t understand the economic wheels that drive the county.

“Kewaunee County is a dying community,” she said. “This is not an economic wheel. We are impoverished by what is going on.”

She said the confusion about the root of the problem is over. “When is the point in time where we will move beyond conversations and have actions take place?”