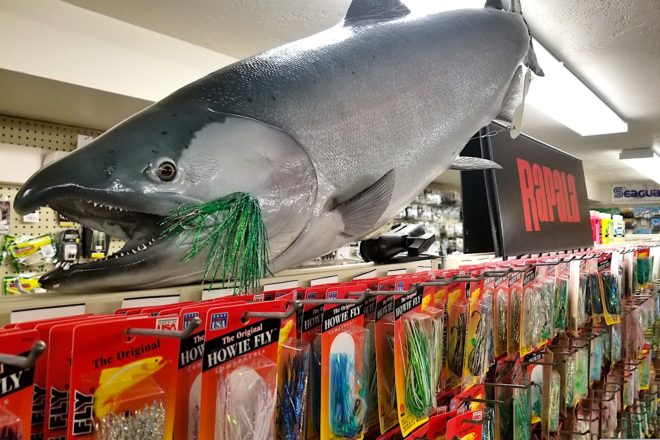 A mounted chinook salmon makes for an eye-catching display at Howie’s Tackle in Sturgeon Bay. Photo by Kevin Naze.

Year in and year out, there’s no place like home when it comes to catching chinook salmon.

The annual charter report and creel estimate released by the DNR show that anglers fishing the Kewaunee/Door County peninsula cranked in nearly half of the state’s entire chinook harvest in 2018. The catch of more than 84,000 was up slightly, but below historical averages.

Algoma and Kewaunee combined for 26,557 chinooks — “kings” as they’re often called — while eastern Door County ports such as Sturgeon Bay and Baileys Harbor added another 14,268. Manitowoc County was a distant third at 10,480.

Hatchery egg collection sites in Sturgeon Bay and Kewaunee mean extra fish planted in peninsula waters, but there’s more to it than that. In fact, coded wire-tag studies prove many fish caught here travel long distances from stocking sites, including from other states. A lot of wild (naturally produced) fish are caught, too, and most of those come from Lake Huron or Michigan’s west-shore rivers.

Meanwhile, Kewaunee County also topped the rainbow trout category with more than 17,500 fish – more than double Ozaukee’s 8,000-plus. Statewide, about 57,000 rainbows were hooked, the least since 2010.

For Kewaunee County, that’s a string of 24 straight years leading the chinook count and 18 in a row for rainbows.

The 2018 estimate of 2.44 million angler hours was the lowest since the turn of the century, and about 144,000 hours below the five-year average.

The top 40 fish in the Baileys Harbor Brown Trout Tournament ranged from 12-plus to 22-plus pounds: an impressive showing with the cold and frequently windy conditions.

Baileys 57 weighed a gorgeous 33.5-inch, 22.83-pounder from Michael Shepard and a long, dark male from James Larsen that stretched 38 inches and weighed 20.3 pounds. Both reportedly came from the bay side of Northern Door.

Hooked Up Tackle in Algoma weighed three top-10 fish, including the third-place specimen, a 17.65-pounder landed by Phil Romdenne.

Fourth place went to Joe Radosevich for a 17.53-pounder on the bay side, and fifth went to Perry Nooyen’s 16.66-pounder at Sturgeon Bay.

Baileys 57 and Hooked Up in Algoma each weighed 14 top-40 fish; Howie’s had a dozen. See photos and more on the tournament’s Facebook page.

Ticks on the increase

A decade ago, finding ticks on dogs or people frequenting the woods and fields of Kewaunee and Door counties was pretty rare. No more. Whether it’s climate change or an increase in the number of deer, mice and other hosts, there’s been a big uptick in sightings in recent years.

Wisconsin has the highest number of cases of Lyme disease in the Midwest: nearly 3,000 confirmed and probable in 2017 alone.

Wood ticks are easy to spot, but it’s the tiny, black-legged “deer” tick that is the primary vector of the bacteria that cause Lyme disease and other tick-borne illnesses.

After spending time outdoors – especially in forests or high grass – inspect yourself, and ask someone to check spots you can’t see. Check your pets, too.

Because it takes time for ticks to embed, take a shower as soon as possible. If one is attached despite your best efforts, use tweezers to hold the tick close to its head and pull upward with steady pressure; no twisting or jerking, or the tick’s mouth parts might break off.

Permethrin treatments are extremely helpful for clothing, but don’t apply the pesticide directly to skin. Permethrin kills ticks that crawl on your clothes and lasts through several washings. Check out YouTube for best practices.

Exposed skin should be treated with insect repellent that contains at least 20 to 30 percent DEET, 10 to 20 percent Picardin or 30 to 40 percent oil of lemon eucalyptus. Be careful to avoid eyes, mouth and hands, and don’t use the repellent on children younger than three.

Learn more about ticks and bite prevention at dhs.wisconsin.gov/tick.

Inching toward a record?

With basin-wide precipitation up about 25 percent over the April average, Great Lakes water continues to rise to near-record levels.

As of April 26, Lakes Superior and St. Clair were only one inch from the all-time highs of 1986; Lake Erie was three inches below its 1985 record.

Lake Michigan rose seven inches in the past month and was nine inches higher than last year at this time. The lake was 26 inches above its 100-year average and 57 inches above the all-time April low, set in 1964 but still seven inches shy of the 1986 record.

The Sturgeon Bay Bass Tournament (sturgeonbaybasstournament.com), headquartered at Sawyer Park, runs May 10-11. New this year will be a kids’ day that includes a fishing contest. The Sturgeon Bay Open (sbobt.org) holds its spring event May 17-18 at Wave Pointe Marina and Resort in Little Sturgeon.