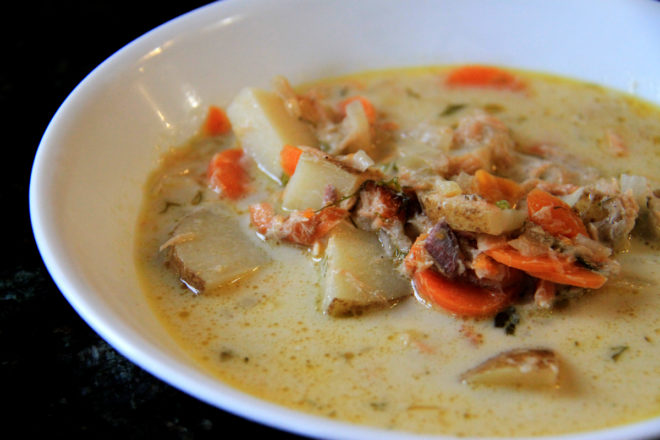 The story began with great coffee, but it has grown to incorporate so much more at Kick Coffee in Sturgeon Bay. The cozy cafe opened in 2001, becoming the city’s first dedicated coffee shop. Two years before that, Colectivo Coffee got its start in Milwaukee, and Kick began sourcing from Colectivo to serve its roasted beans alongside Rishi tea, also out of Milwaukee.

Since then, the shop’s ownership has changed hands many times, but the good coffee and espresso have remained consistent. When Kate and Dave Utzinger took over as owners in May 2018, their commitment to the farm-to-table movement and eating locally has reinvigorated Kick’s food offerings. They’ve redesigned the menu to embrace the changing seasons and take advantage of the bountiful produce, dairy, meat and baked goods available in the area.

“Everything here is at least sourced in Wisconsin, but mainly in Door County,” Kate Utzinger said. “We have three CSAs delivering throughout the summer, and [we] have been stockpiling for the rest of the season.”

“I’m really passionate about the farm-to-table concept and supporting the local agriculture and community,” Utzinger said. “We are a coffee shop first, but we take something like coffee – that everyone is familiar with – and use it to introduce other local flavors from the area. There’s more to eat here than just cheese curds!”

Specials change based on which produce is readily available, rotating daily or every few days. The featured soup at the start of this week was a Scandinavian fish stew that proved to be very popular with the local crowd during the last chilly season. It’s made using a fish stock, smoked salmon, potatoes, carrots and seasonings – and it smelled absolutely mouth-watering, especially on a rainy fall evening. Other rotating soups include tom kha, cabbage, French onion and even the occasional borscht – a Russian-style beet soup.

Another favorite meal with regulars is Becky’s Breakfast: Bearcat’s smoked whitefish spread, sliced cucumber, red onion and sprouts served open faced on an everything bagel. The daily quiche is always popular, too – well loved for its potato crust, which, without flour, is gluten-free.

In the bakery case, you’ll find a variety of grab-and-go items. On the day I visited, the case displayed a coconut and golden raisin coffee cake, carrot muffins, energy balls and caramel apples. A fellow patron confided in me that I’d have to return for the cupcakes, which aren’t always available but have a devoted following. They come in maple-bourbon and chocolate-beet flavors that are said to be unforgettable.

On Nov. 1, the new winter menu will debut some heartier options to warm up with, including a tomato-based chili with pinto beans and local beef, and a roast butternut squash and barbecue tofu burrito. Many favorite items will stay, but the BLT and chicken-salad wrap will retire for the off-season.

Kate Utzinger got her start and many years of experience in the restaurant industry in Boston and New York while supplementing her career as a trained sculptor. She’s originally from New Hampshire, but she has connections in Door County through her husband, whose family’s roots go deep in the Sturgeon Bay community.

This is the first time she’s been able to explore the other side of the food business – working in the kitchen as the chef, establishing the menu and sourcing ingredients.

“It’s fun to be on the other side of the kitchen,” Utzinger said. With the goal of using local and organic ingredients whenever possible, she certainly has put her creativity to excellent – and delicious – use.