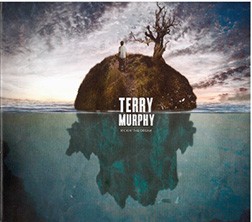 Terry Murphy had me immediately with the first song, an ode to newspapers called “Morning Paper” on his new CD Kickin’ the Dream (have you ever heard anyone sing the praises of television news? REM’s “What’s the Frequency, Kenneth?” does not count).

Murphy is a multi-instrumentalist who here plays acoustic guitar, mandolin, ukulele, lap steel and harmonica, and is joined by some well known names, including Eric Lewis on electric and slide guitar, dobro and steel guitar; Paul Sowinski on bass; Lynn Gudmundsun on violin; Rich Higdon on percussion; Claudia Russell on vocals. David Alley was the sound engineer at Utopia Soundworks in Sister Bay. The sound is beautiful.

Murphy’s singing on much of the record reminds me of Steven Stills, especially on the great “Blue Highway” and on “Empty Your Bucket.” And on “Big Red & Old Blue” he evokes a John Prine-like sound. He admits in one of the songs (“Critical Acclaim”) to having covered these gents and others in the past, but the influence is a natural extension of himself rather than mimicry.

He shows a fine sense of humor throughout, especially on “The Woody Song,” where he wonders what Woodie Guthrie would do if he lived in our time. Would he have wi-fi at his own café and a fancy phone as he rides the rails?

He also has a tribute to thrift stores in the song “Shopping at the Resale Store.” Oddly enough, Terry Murphy and I first met in a thrift store, while I was pawing through old 45s and he was looking through the CD collection.

This 15-song CD is packed with Murphy’s take on the world and great music. 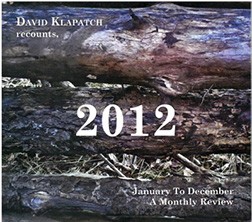 Although we are well into 2015, I spent a recent afternoon back in 2012, thanks to David Klapatch, who recounts 2012: January to December – A Monthly Review, his new CD.

“In January 2012 I came up with the idea to write a song a month and I thought to myself, ‘I better start writing the song ‘January’ right away!’” Klapatch said. “So every month I would journal about the month and then work on melodies and record a rough sketch with vocals and acoustic guitar. At the end of 2012, I went back and polished the songs a bit more and started adding additional instrumentation. That’s pretty much how it happened.”

I’ve had the CD since well into 2014, but I’ve been on a vinyl kick lately and just got reconnected with a CD player. So, apologies for taking so long, David. But I feel it really is meant to be listened to on a sunny winter day, because, of course, it starts off in the winter. Sturgeon Bay is evoked in the first song, “January.” The U.P. is featured in the frosty “February” song. But I’m not big on deciphering lyrics, so I can’t tell you what the words refer to. I prefer to just let it all wash over me.

There is a cinematic sweep to this concept album, the feeling of a journey with beginning, middle and ending. It was written, recorded, performed and produced by Klapatch, with help from Tom May on trumpet, Sara D’Ippolito adding some vocals, and Ryan Cihlar on drums and audio mixing.

There is especially interesting bass playing throughout. Great percussion. Great vocals. Plenty of ringing steel strings. Lots of dreamy melancholy. And at least one hard rocker in August.

Great musical ideas throughout. The sound is fantastic. This is a very easy record to like. I expect to be revisiting 2012 often.