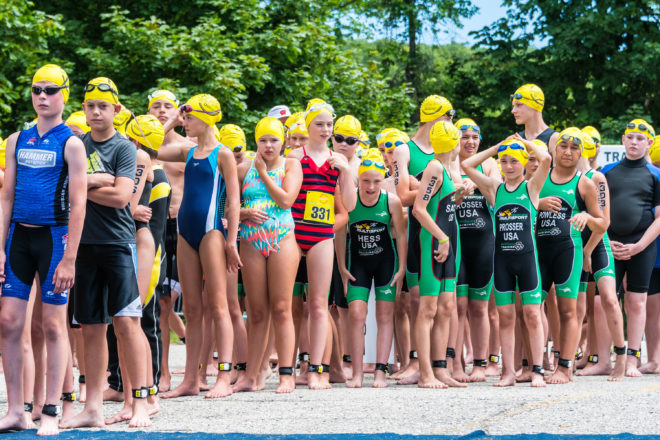 Eleven-year-old Josie Martin was a quarter mile into the final leg of the 2018 Door County Kids Triathlon when I caught up to her as I monitored the course. She was clearly struggling, tears in her eyes, with her mother, Sarah, walking beside her and gently urging her to keep going.

It was Josie’s second time participating in the event, but this time the temperature was higher, and as one of the older participants, she had to wait in the sun before entering the water, leaving her hot and thirsty.

I biked ahead to grab her a bottle of water and returned to one of the most inspiring moments I’ve witnessed during my 12 years of working at endurance events. Another boy roughly the same age as Josie slowed down to walk beside her for a bit.

Then another young girl coming back from the turnaround called out, “Josie, you can do it – you’re doing great!”

It kept happening. One child after another, lifting Josie up as she fought back tears and her body telling her to quit.

“It was hard,” Sarah said. “You don’t want to be that parent forcing your child to do something, so you want to encourage them, but it’s hard to know when to back off.”

But the encouragement wasn’t coming just from Josie’s mom.

“It was pretty amazing,” Sarah recalled. “To see all these teammates of hers from swimming, and coaches, and random strangers encouraging her – it just shows what an amazing community we live in.”

You see a lot at the Door County Triathlon – the annual adult event. You watch incredible athletes powering through a 1.2-mile swim in rolling waters, a 56.3-mile bike ride in all kinds of weather, a 13.1-mile run that includes two brutal climbs up the bluff. You stand slack-jawed as participants with disabilities do it with MyTeam Triumph, 60-somethings finish faster than you could dream of and stragglers pull themselves out of the medical tent to keep putting one foot in front of the other.

But nothing gets me like the 300-plus competitors in the Kids Triathlon. Race Director Sean Ryan added the event for kids ages six to 14 to triathlon weekend four years ago. At the time, the Door County YMCA was organizing the event on a shoestring budget on the same day as the Saturday sprint triathlon.

“After talking to Tom Beerntsen, we decided it only made sense to do it at Murphy Park,” Ryan said. “We knew a lot of the participants were children of the adult participants, and here we could give them the same course and finish as the adults.”

Then Door County Medical Center (DCMC) came on as a title sponsor.

“We strive to be a part of anything that encourages our children to be active and healthy,” said Kevin Grohskopf, chief business development officer at DCMC.

Pediatrician Amy Fogarty said it’s a great way to teach kids about active lifestyles. “Any time kids are active in fun ways and engage with the outdoors, there are only positive results,” she said.

With lifeguards, staff and volunteers already on hand, all the pieces were in place for a big-time, safe experience for the kids. The distances are short enough that they’re achievable for most kids, but also challenging.

“We keep the kids in shallow enough water with enough lifeguard supervision that there’s little, if any risk,” Ryan said.

Not only does the event breed future sprint and half-iron competitors, but it gives the Door County Triathlon a leg up on the competition.

“One of the things we can compete on is the breadth of our product offerings,” he said. “We have something for the entire family.”

That something is much more than just an activity. Some kids are energized by getting a medal or hearing cheers as they come out of the water or putting their bib-number tattoo in black on their arm. Others are competitive, arriving in full race kits and optimizing every stroke, stride and pedal.

Then there are those who get even more: proving something to themselves and learning a little about the compassion of their friends and teammates.

After spurts of running and walking through the one-mile run course, Josie could see the finish chute ahead. A smile crept across her face, and she started to run, then sprint through the finish line.