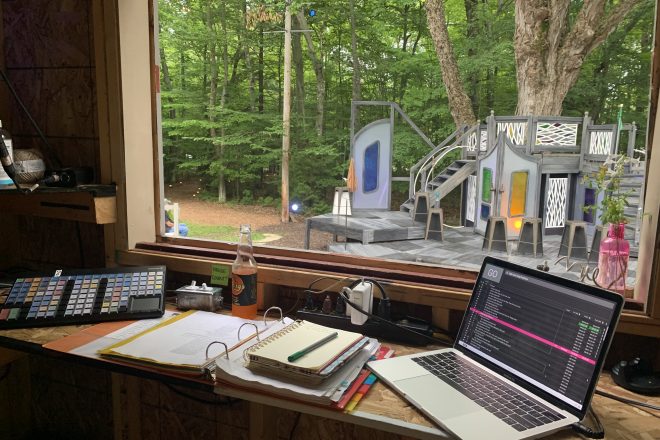 Although many people who make theater their career have experiences with the art form at a young age – performing in youth or high school productions, for example – many others experience theater’s powerful pull after they’ve already set their sights on a different path.

Such was the case with Kira Neighbors. Her high school didn’t have a drama club, so her first theater experience came while she was studying marine science at the University of South Carolina. It wasn’t long after joining the musical-theater club there that she realized she was having much more fun with theater than she was with her major – though she wasn’t considering theater to be a viable career at the time.

While taking supplementary courses one summer, she found herself in a one that introduced theater to non-actors. Such classes are popular electives for non-theater majors, in part because they’re interesting and in part because they use theater games and techniques to teach life skills such as public speaking, improvisation and teamwork. Eventually, Neighbors was hooked and changed her major not long after.

Because she didn’t have a background in theater, Neighbors asked around to see how she could build her experience base. Among the advice was to look into being an assistant stage manager. She found she really enjoyed working backstage, but she had to look outside South Carolina for internship possibilities.

While searching for season-long internships during her final semester, Neighbors was accepted to the Milwaukee Rep’s summer program, and the relationships she cultivated with other stage managers while with the Rep further solidified her love for theater. When Door Shakespeare’s artistic director, Michael Stebbins, contacted the Rep looking for a stage manager in 2019, she got a recommendation.

Neighbors had never visited Door County before her Door Shakespeare position, but she had high expectations courtesy of her Milwaukee colleagues, who told her how beautiful and fun the county is. When Neighbors arrived at Door Shakespeare, she was in for a very different experience.

“Door Shakespeare is so wonderful in how simple it is,” she said. But simplicity comes with certain challenges, and as the production stage manager, Neighbors has a lot of responsibility.

Many of her duties are the same as they would be anywhere else: She’s in charge of scheduling and calling the show. On one hand, she assists the director to keep the vision they’ve established and ensure that it remains consistent. On the other, she performs a human-resources function for the actors through conflict mediation.

And many other duties are more specific to Door Shakespeare. Because it’s a smaller company, Neighbors feels she’s much more hands on. She’s wiped the stage down with a rag during inclement weather, for example, and if the weather worsens before a show starts, she’s the one who makes the call to cancel.

Neighbors learned a lot from her peers in Milwaukee, the most important takeaway of which was to approach every facet of the experience with positivity. She always asks herself, “How can we make this the best we can?” – though all the while, she much also focus on efficiency, keep creativity at the forefront, and make sure things stay practical and realistic.

In 2019, Neighbors worked on both Henry V and The Merry Wives of Windsor, and they provided very different experiences. Windsor was a comedy with a lot of props and costume pieces for Neighbors to set out and track every night. Henry V was a historical drama with elaborate movement, which meant many more blocking notes in her cue book.

Neighbors recognizes that her work at Door Shakespeare is more holistic than with other companies, but that added responsibility also means a greater sense of investment and ownership. Though a stage manager is largely concerned with the big picture, Neighbors says she feels “more connected to the little things at Door Shakespeare.” And when she does have to make the big call to cancel a show, she’s not too worried about how the audience will react.

“The audience members will stick with you,” Neighbors said. “They think it’s a fun adventure.”