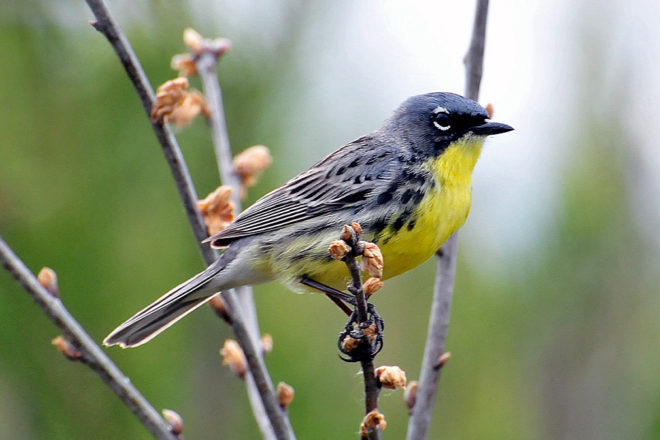 The Wisconsin Ecological Services Field Office, a part of the U.S. Fish & Wildlife Services, reports on the 2017 Kirtland’s warbler nesting season, which marked the 10th year of Kirtland’s documentation and subsequent monitoring in Wisconsin.

From only 11 Kirtland’s and three nests found in Adams County in 2007 to 53 individuals and 20 total nests among Adams, Marinette and Bayfield counties in 2017, the population has grown and geographically expanded in the decade of conservation work.

Kirtland’s are responding to the efforts from dedicated partners and the numbers of individuals and nests in Wisconsin continue to increase.

On May 15, 2017, the first Kirtland’s of the season was detected at the Adams County site. During the course of the week more Kirtland’s were found, and most of the color-banded males occupied territories they held in previous years.

This year, many returning males were unbanded. This may indicate a change in population structure, with older males dying and younger males occupying the majority of the male age-structure in the population. It may also indicate an increase in fledgling success since 2015, with more birds returning to the site to breed.

The oldest known male in Wisconsin, at eight years of age, returned to nest this year. He has made eight trips from Wisconsin to the Bahamas and back, totaling approximately 12,000 miles. The oldest Kirtland’s on record is a male that was color-banded in Michigan and re-sighted, aged to be 11 years old.

Here are some more details from the year of observation: