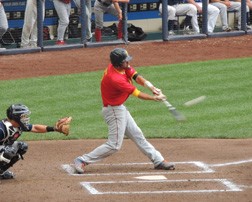 Nick Kita from the Northern Door Chiefs Legion team was selected to play in the Wisconsin American Legion All-Star game on Aug 10. It was a North versus South game that was played at Miller Park after the Milwaukee Brewers game. Kita was one of three catchers for the south team. He caught three innings and hit a line drive to the center fielder in his only plate appearance. The game was tied 3-3 after eight innings. The North team scored a run in the top of the ninth to get the win.

Every year, 54 American Legion players from across Wisconsin are chosen to play in the All-Star game held at Miller Park. Wisconsin is the only state to have an All-Star game played in a Major League stadium.