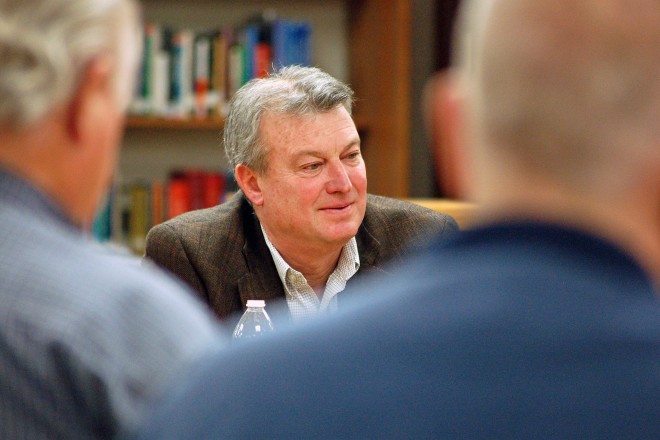 If Republican legislators’ ears were burning on Feb. 8, it’s because people attending Rep. Joel Kitchens’ listening sessions in Algoma and Sturgeon Bay had harsh words for the way the majority party fast-tracks questionable legislation, and has gutted transparent government, public education, the Department of Natural Resources, and the state’s long history of conservation leadership.

While praising Kitchens for his constant communication with constituents, several people at both meetings advised him to carry a message to his Republican colleagues in Madison that the people of Wisconsin have had enough. Most of the people saying this admitted to voting Republican.

Sen. Frank Lasee’s ears must have been scarlet, for he took the brunt of the heat for not communicating with constituents and for sponsoring questionable legislation, such as Senate Bill 432, which makes it easier for investor-owned utilities to do business in Wisconsin by putting the responsibility for a referendum on the public.

One man at the Algoma meeting identified himself as a Republican and a veteran who can’t get Lasee to return a telephone call. “I feel like I wasted a vote on him,” the man said.

“I don’t think there’s anybody who did more,” Kitchens said.

Close to 40 people showed up in the Algoma City Council chambers to voice their concerns. Many of them were veterans who wanted Kitchens to hear their opposition to Assembly Bill 821, which would transfer most powers from the nine-member citizen Board of Veterans Affairs to the Department of Veteran Affairs and its politically appointed department head. The bill also called for changes in the county veterans service officer (CVSO) program, including making the role optional to counties, but that portion was dropped from the bill after veterans rallied in favor of CVSOs.

Veterans also constituted about half the audience of 30 who showed up for the Sturgeon Bay listening session to voice similar concerns with AB 821. One veteran who identified himself as a lifelong Republican said he was surprised to learn that the four sponsors (Sen. Van Wanggaard, Rep. Alvin Ott, Rep. Ken Skowronski and Rep. Dale Kooyenga) of the bill were not liberals but Republicans.

“It’s not going to go anywhere,” Kitchens said of the bill, attributing that to the many veterans who spoke out against it.

Drinking water was a major concern at the Algoma session. Kitchens was asked if there is more support coming from the DNR for Kewaunee County’s continuing water contamination problems and how Madison is viewing the problem.

“I’m trying to be realistic about this,” Kitchens said. “If we’re going to sit back and wait for the DNR to ride in and save the day, it’s not going to happen. We need to take a lot of this on locally.”

And that is being done, Kitchens said, beginning with the Kewaunee County board’s September 2014 passage of an ordinance limiting the spreading of manure on thin soils during the winter.

Kitchens added that Davina Bonness, director of Kewaunee County’s Land and Water Conservation Dept., is working with her counterparts in Door County, where, he said, they took it upon themselves 25 years ago to enforce strict nutrient management plans. Strict nutrient management plans is the way to limit CAFOs, Kitchens said. “If you don’t have the land [to spread the excess manure], they can’t exist,” he said.

Kitchens said he believes that with the threat of the Environmental Protection Agency getting involved in the county’s water issues, farmers are going to voluntarily follow best management practices.

A retired public school teacher asked Kitchens if he could do something to heal the divide created by Act 10. She said that in a meeting with Sen. Lasee, he said Act 10 wasn’t really about the budget, but was political revenge against union members who did not support Scott Walker and his party. Then she asked why the police and firefighter unions were exempted.

“Please introduce legislation to strip firefighters and police of unions so they can all be equally disrespected,” the woman said.

Kitchens said it would have been politically difficult to pass Act 10 had public safety personnel been included in the destruction of public unions.

“Does that mean they’re better than us?” the woman asked.

“I never talked to the governor about that,” Kitchens said. “I’m guessing it is political. If you had alienated the police and firefighters at the same time, it would have been impossible.

“I certainly respect teachers and want them to feel valued,” said Kitchens, who is vice chair of the Assembly Education Committee and hopes to become chair. “I don’t think I’m going to be able to introduce a piece of legislation to make it better. It’s something I’ll work towards.”

The same woman later mentioned that she serves as a Spanish translator for Hispanic agricultural workers in Kewaunee County. She said these workers are being profiled by area law enforcement, pulled over and ticketed, or worse.

“The farmers are upset. They are losing their workers,” she said.

“It’s a controversial issue,” Kitchens said. “The reality is that we need them here. Our economy would collapse without those workers.”

He said Rep. Paul Tittl of Manitowoc has written a bill to address the situation, but it probably will not be brought forward until the next session.

“Have you asked the police to back off?” the woman asked, at which point Kewaunee County Sheriff Matthew Joski interjected, “That’s a completely skewed perspective,” he said, adding that his department is absolutely not profiling Mexican ag workers.

“My officers would love to run in the other direction,” he said, explaining that a typical traffic stop is 10 minutes, but stopping a Mexican ag worker can tie up an officer for several hours.

Joski said his department can’t turn a blind eye to the issue because it is a matter of public safety when someone is driving without a license and insurance. However, he placed the blame on the system, not on the workers, because they are here with visas, but without a way to get to work short of breaking laws and driving unlicensed.

“We’ve got to have a process in place where there’s skin in the game,” Joski said. “We’re not heartless about the issue. These are human beings. We’re trying to find solutions. The last thing we want to do is pull these people over.”

Former Republican Assembly candidate Terry McNulty was in the audience, and he suggested that those ag workers “are cheating us all” by not paying taxes or paying into other programs that the rest of us must.

Joski suggested everyone get past the rhetoric of immigrant ag workers. “They are provided a work visa but no way to get to work,” he said. “They are paying taxes and Social Security.”

At the Sturgeon Bay session, Kitchens was asked about Assembly Bill 600 (and Lasee’s Senate companion bill SB 459), a bill that the Wisconsin League of Conservation Voters has dubbed “the polluters’ grab bag.” The bill deals with filled lakebeds and the public trust doctrine, which is at issue with the planned hotel in Sturgeon Bay’s Westside Waterfront Redevelopment.

Kitchens said there were a lot of changes to the bill since it was first introduced and more on the way, but indicated that he would vote against it.

A member of the audience said, “I suspect strongly this is about the hotel.”

Kitchens added that he has been working with Rep. Adam Jarchow, who introduced the shoreland zoning changes that were inserted into the biennial budget last summer.

“Counties resent that it was done on the state level,” Kitchens said, adding that Jarchow is working on a compromise bill that will make changes to the legislation, “Some especially for Door County.”

Another attendee said he was disturbed by all the fast-track legislation. “I have a feeling that there are nefarious desires being snuck into things and that’s the very reason they are using this fast-tracking system. I hope I’m wrong, but…”

“That’s the impression it gives,” Kitchens conceded, adding that he doesn’t like it and tries to apply brakes when he can.

Asked to respond to recent reports that UW-Extensions are facing personnel cuts as part of the UW System budget reduction in the last state budget, Kitchens said he believes that is a political move by the university system, knowing that rural areas that depend on their extension offices will raise a cry about budget cuts. He said the extensions are doing a good job and he will definitely ask questions before any cuts are made.

Another man who identified himself as an educator and a member of Door County’s Conservation Congress said he can’t believe the anti-conservation issues being presented in Madison.

Someone asked about Lasee’s bill that opens the door to for-profit utilities to do business in Wisconsin without the mandatory public referendum. “Did communities come and ask for this, or was it the private company in Pennsylvania (Aqua America)…The public perception is that special interests and lobbyists seem to get what they want.”

Sturgeon Bay Alderwoman Kelly Catarozoli said the water privatization bill and the removal of an automatic referendum is just another example of government putting their responsibility on the people.

“Everything’s on us now,” she said. “The current Republicans are on this warpath of destruction with our natural resources. If you could relay that to your colleagues. What are they doing? For a young person living here, it makes us want to leave. Environmental issues for young people are No. 1. It makes us feel like we’re going to end up in the toilet.”