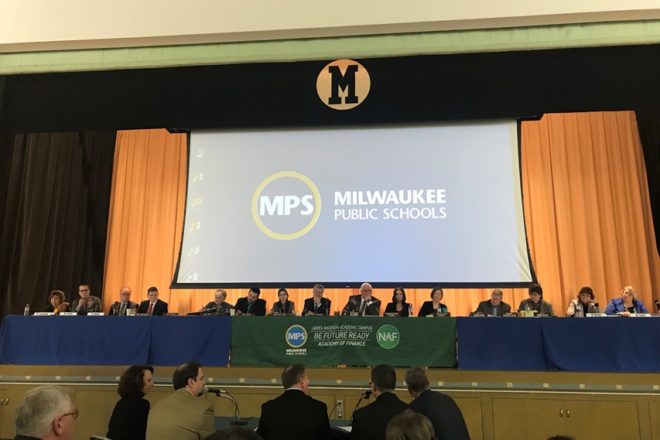 After nine public hearings held across the state, representing what Rep. Joel Kitchens calls “the most extensive discussion of educational funding in a very long time,” the Blue Ribbon Commission on School Funding that Kitchens co-chaired with Sen. Luther Olsen moves on to its next step: recommendations for legislative action on school funding.

“We traveled to all corners of the state and heard from lots of people,” Kitchens told the Pulse. “One thing you realize is that the districts have a lot of problems in common.”

While some areas of the state do have some concerns unique to their region – Kitchens mentions the sparsely populated northern portion of the state and the southeastern region with many small school districts – all districts are hampered by the current funding formula with revenue limits that have required so many of them to seek referenda for both capital projects and operational funds.

“Schools want some certainty with their funding. They want to be able to plan and know two or three years from now how much money they will have,” Kitchens said.

One idea for that is to enact a law that ties per-pupil spending to the inflation rate.

For declining enrollment that all rural districts face, Kitchens suggested a funding mechanism that takes into account fixed costs that don’t go away when you lose a few students.

He said special-education funding is another issue the commission heard about throughout the state. While special-education enrollment has climbed, state spending on it has declined, forcing school districts to take money away from other programs for special education.

“We heard that everywhere that they are struggling with special education,” he said, so a plan was devised to gradually increase special-education funding.

“The schools have been very supportive of what we’ve come out with because we do address a lot of their major concerns,” he said.

The next hurdle is finding legislative support for bills and budgetary items that will be introduced.

“It will always be about money,” Kitchens said. “We’ve been very, very fortunate that the economy’s been doing so well and we have the biggest rainy-day fund we’ve had in our history. Nobody wants to blow that at once. So it will be about money. That’s why we did give them choices in our final analysis. Joint Finance has to balance the checkbook. It would be presumptuous for us to say we want you to spend $100 million here.”

But Kitchens is hoping that with support from the school districts, commission recommendations will gather bipartisan support, as well as support from outgoing state school superintendent and governor-elect Tony Evers.

“There’s going to be some negotiation. Tony Evers will come out with his plan because that’s been his job for years,” Kitchens said. “In the end, I think there will be some common ground. I don’t have much doubt about that. I’ve read what he has proposed in the past. I think this is going to give us a good place to land. School funding is certainly one of the most complicated issues to deal with. It’s so complex there are very few people who really understand everything about it. That makes it difficult.”

Kitchens said one plan that will cost nothing to correct and is simply a common-sense fix would allow retired teachers to return to the classroom as substitute teachers.

He said the state cracked down on “double dipping” by retired state employees because of a couple of bad actors.

“The damage from that is our districts can’t find substitute teachers because they put so many limitations on retired teachers. They end up hiring, basically, babysitters,” Kitchens said. “Every district is struggling with that. We’re going to loosen up those requirements for retired teachers. You’re sacrificing kids’ education because you’re worried about one or two people that may be cheating. Districts would really like if we get that done. I’m pretty confident we’ll get that done.”

For more information about the Blue Ribbon Commission on School Funding, visit legis.wisconsin.gov/2017/committees/joint/brc-sf.