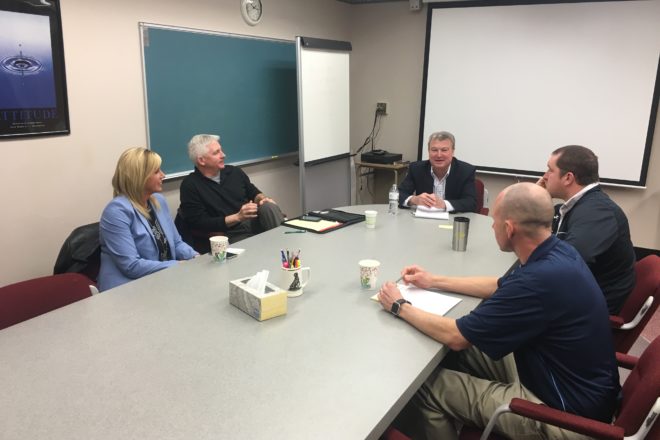 Representative Joel Kitchens met with four area superintendents on March 16 to better understand what they need to make their schools safer. The discussion came on the eve of a $100 million school safety package introduced by Governor Scott Walker.

Walker’s package did not include any gun control measures and the Senate rejected Democrats’ attempts at including gun control provisions when the body passed the package on March 20. Four Democrats in the Senate voted against the package, saying it did not go far enough to address school violence.

Walker has also been opposed to arming teachers, despite Attorney General Brad Schimel’s support for the measure.

With those larger debates happening on the state and national level, Kitchens and the superintendents focused on building security and mental health.

“We talked about the importance of the physical support, making sure that I have secure entrances,” said Gibraltar Schools Superintendent Tina Van Meer. “We can do that and it will make people feel safe, but the real work is deeper than that.”

All superintendents, including Van Meer, Dan Tjernagel from Sturgeon Bay, Tony Klaubauf of Denmark and Nick Cochart of Algoma, agreed that school just isn’t what it used to be.

“I think what children are exposed to today is drastically different than what they were exposed to 20, 15 [years ago],” said Cochart.

Mental health was discussed as the long-term solution after buildings are made more secure, but the consensus was that mental health professionals and social workers schools seek to hire can’t be found in the state.

“We need more counselors, more social workers, but part of that is there just aren’t those people out there,” Kitchens said.

Klaubauf suggested the state find ways to incentivize those professionals to come to Wisconsin or encourage Wisconsin students to pursue those career fields.

“That’s not going to solve something tomorrow, but it will actually help schools down the road if we can get more people with that kind of training,” Klaubauf said.

“Everybody really felt like we need to encourage police presence here, not necessarily as a confrontational kind of thing at all, but just building relationships,” Kitchens said.

Sturgeon Bay and Denmark have a full-time officer for their school districts. Van Meer and Cochart shied away from having a uniformed police officer employed in the school, instead seeking to encourage officers to split their time between the school and broader community patrol.

“I think there is tremendous value in an officer working in our community but also working in our schools,” said Cochart. “They will work with a student but they will often find themselves working with a family of that student later that day… When you have maybe a dedicated police officer to the school, they miss out on the community piece.”

The group agreed that it takes a certain kind of police officer to interact with the school and its students.

“The person makes all the difference in the world,” Klaubauf said. “It can’t just be a person with a badge and a gun.”

The proposed $100 million in school safety grants will be administered by the Department of Justice in consultation with the Department of Public Instruction. Area superintendents hope the money will not be awarded solely on a competitive grant process, which Klaubauf said comes down to who has the best grant writers instead of actual need.