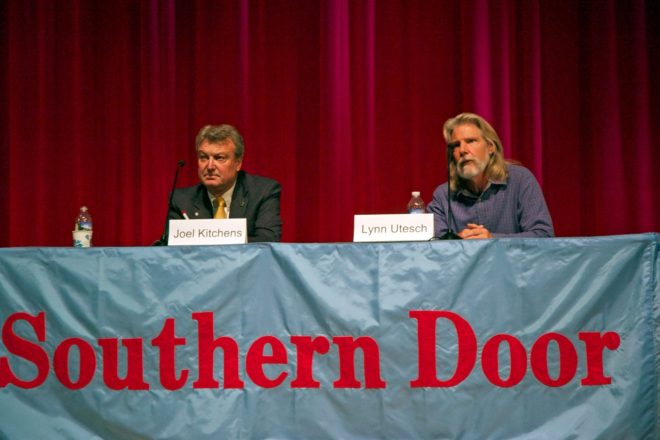 Rep. Joel Kitchens and Lynn Utesch face off the evening of Oct. 12 at the Southern Door School Auditorium in a candidate forum for the 1st District Assembly race sponsored by the League of Women Voters of Door County. Photo by Jim Lundstrom.

In spite of some repetitive questions from the audience, the two candidates for the 1st District Assembly seat at the Oct. 12 League of Women Voters candidate forum at Southern Door High School were able to clearly distinguish themselves from each other while representing who they are.

There is a natural rancor built into the partisanship of the American political landscape that served in this case to animate what could have been a very dull 90-plus minutes.

What incumbent Republican candidate Joel Kitchens and Democratic challenger Lynn Utesch showed while answering 22 questions from the audience at the forum is that they are both good men, devoted to their communities and to providing community service. Both serve in their own ways.

Two good men with common goals, but pitted against each other by partisan divides. Listening to them, you couldn’t help wondering what they might accomplish working together.

And then you are jarred to reality as they took turns showing their purely partisan view of the other fellow as a public servant.

In essence, and speaking without naming him, Utesch more than once tarred Kitchens with the Madison Republican Old Boys Club brush, as in this: “I’m asking for your support on Nov. 8 because the status quo just isn’t working. Too often we see good neighbors with good intentions run for political office only to have them turn their backs on us once elected.”

Kitchens retaliated by naming all the things he has accomplished in his first term in office, suggesting that in just two years he has become a savvy veteran of how things are done in Madison, and that Utesch would get nothing done with his naïve idea of pie in the sky government. He also poked fun at a Utesch campaign ad that includes the words “I Will Not Compromise.”

“You may as well send a toaster because they’ll get as much done,” Kitchens said.

When the question of campaign financing came up and it was Utesch’s turn to answer first, he talked about how it is an unfair system and that his campaign funds are nowhere near as healthy as the incumbent’s. Utesch said while his campaign was relying on money orders from seniors who can’t even afford to have bank accounts, Kitchens had a healthy campaign coffer due to “outside money.”

Kitchens showed a shrewd feistiness with his response, pointing out the $1,000 limit in Wisconsin, which does not amount to big money in politics these days, and then turning the tables on his opponent, pointing out that the Democratic Party “is putting more money into the Assembly race than ever in its history. The question for Lynn should be, ‘Why are they not giving me any money?’”

There were digs by both candidates throughout the forum, but beyond that, they did deal with 22 questions from the surprisingly small audience (I counted 50-some just before the forum started, but there were some late arrivals).

Not surprisingly, since the forum was taking place in a school, education was the subject of four of questions, and three of those were the same question phrased three different ways.

Both candidates are for education. You can learn more by watching the entire event here: youtube.com/watch?v=sEUx8O-ao0Q.