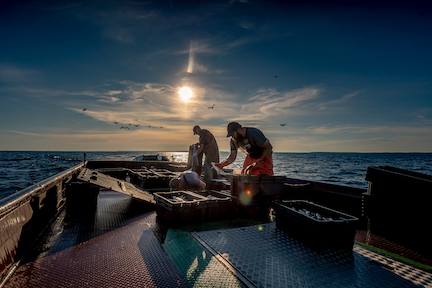 The fishing boat in action. Photo by Brett Kosmider.

This week we pivot our Know Your Grower series away from harvesting produce to harvesting whitefish. The bountiful waters of Lake Michigan surround Door County, making it home to a vibrant fishing community that dates back to the mid-1800s. That community today includes several larger commercial fishing operations, including Henriksen Fisheries.

The fishermen: Charlie and Will Henriksen, along with two year-round and several part-time employees

Henriksen Fisheries delivered freshly caught whitefish to the plates of an estimated 100,000 diners in Door County this year, according to the latest calculations from owner Charlie Henriksen. That’s up from the 60,000 they’ve been providing consistently during the past several years.

“We now supply 27 local businesses, from Gills Rock to Algoma,” Henriksen said. “With the fish now recolonizing the lower bay, we have been able to meet the tremendous local demand. The ‘buy local’ messaging, along with the great chefs we have in the area, have helped to do that.”

Henriksen, who’s from the Chicago area, got his first taste of Door County fishing some 40 years ago when he was recruited to help ice fish one winter. He arrived in the county at age 20 to assist his father, who had bought an old hotel in Ellison Bay, and, as the story goes, he never left. Henriksen had ice fished for two weeks with Clayton Johnson and Craig Woerfel when his father suffered a heart attack and died, leaving him to assist his mother and siblings. Henriksen returned the next winter to work with the Weborgs, who had just begun their own fishing business. He ran a restaurant for several years during the summers, and he kept fishing in the off-season.

“I learned from the people around me all through the ’70s,” Henriksen said. “Then in 1980, I started fishing full time and learned trap nets from Jeff, Mark and Dicky Weborg. Did that for five years, and then for five years was with Neil and Frank Teske – I ran their crap net rig. It was during that time that the Weborgs got me into what I call ‘fish politics.’”

Fishing is a heavily regulated industry that’s always evolving, and Henriksen plays an important role in addressing and navigating the issues as chair of an advisory group to the DNR and as part of the state trade association.

“It’s a whole different side to this business that people don’t really know about,” he said.

As for the business, Henriksen Fisheries, Charlie Henriksen got the name started in 1987 when he opened a facility to process and package the fish his operation caught.

“We actually made a way to package boneless fillets,” he said. “We had a friend who had a packing business in Illinois, and we changed how fish were marketed by starting a pin bone fillet – which is the industry standard now, but it used to be too labor intensive. Well, people want fish with no bones. It is still our signature product, and we are pretty proud of it.”

Through that successful business, Henriksen was mainly selling to food-service companies such as Sysco and Gordon, but he wanted to step away from the processing to focus on fishing full time. He sold the processing business and planned to sell the catch unprocessed, but that plan didn’t last long.

“A couple local guys – Bruce Alexander and JJ – said, ‘Hey, we want your fillets.’ They were used to getting the boneless fillets,” Henriksen said, “so they convinced me to keep processing. We only stopped processing for two months.”

The company refocused on selling its catches locally, rather than to food-service companies, and it’s grown to become the local fish provider that it is today.

Fish caught in the morning are often processed by lunchtime and delivered to local restaurants by the afternoon.

“A restaurant is often selling a plate of whitefish that was caught that morning,” Henriksen said. “People are surprised to find out the fish are really that fresh.”

Henriksen works with his son Will, who has been with him full time for the last decade, and part time before that. Will is poised to take over sometime in the future.

“I think I have a conjugation problem,” Charlie said. “Some days I’m not sure if I’m partially retired or just tired again.”

Will’s partner, Kristie Moss, has helped the business break into the farmers’ market scene this year. At the start of the pandemic, business was down because of restaurants being closed and reduced sales, so they were looking for ways to get creative with selling their fish.

First they offered to fulfill fish orders directly to customers at a reduced price – or free if needed, with no questions asked – through taking text and online orders on Facebook. Then they partnered with Sonny’s Pizzeria to provide local fish-fry meals to those who needed them.

As the summer approached, Moss pitched the idea of selling at farmers’ markets after realizing she wouldn’t be able to sell the dog treats she usually sold because they were not considered essential products. They purchased a van and refrigeration unit and got started – and so far it’s been a good way to diversify.

“We’ve seen a great response and have some regular customers,” Henriksen said. “We don’t have a retail space now, but maybe eventually.”

Where to get the goods: Aside from finding Henriksen Fisheries’ whitefish on menus throughout the peninsula, look for it at the Nor Door Community Market at the Mink River Basin’s banquet hall every Friday, 10 am – 1 pm.