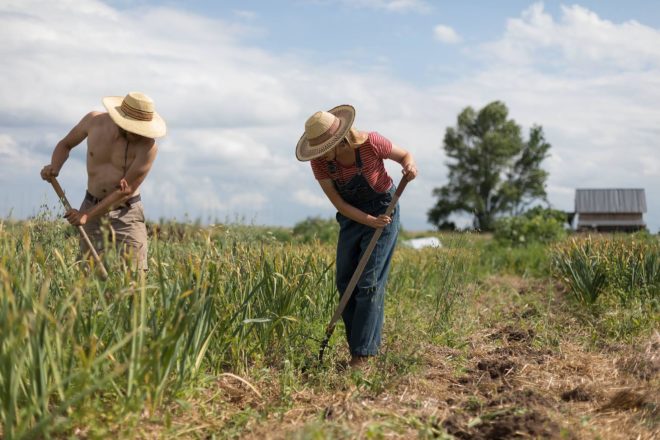 Blohoweak and McCarty had been working in the farm-to-table industry in Madison before moving to Door County in 2014. The lure was a homesteading way of life on a 60-acre tract of land that they purchased from Ben’s uncle.

They did not intend to be full-time vegetable growers. Feeding themselves and bartering goods with neighbors was how they had envisioned their self-sustaining lifestyle. Then they put in a plot of vegetables and began selling at farmers’ markets in the fall of 2015.

That went well – so well, in fact, that they continued to fill out another plot and then another, continually building their soils, improving the habitat on their farm and finding ways to help customers put farm freshness on their tables.

It worked. Today they have customers from Appleton to Ellison Bay who want Cold Climate’s regenerative/organic vegetables.

He’s become a jack-of-all-trades by necessity – “no joke of that with a farm,” he said – with adaptability being one of his primary skills. It’s not something he could have learned in school, he said, even if the couple had earned degrees in agriculture rather than liberal arts at UW-Madison.

“Every year is crazy different,” he said.

Blohoweak and McCarty have two high tunnels and a few small greenhouses that allow them to start early, keep going throughout the year and harvest winter greens, even during the depths of winter. The Community Supported Agriculture (CSA) side of their business delivers weekly bushel baskets of fresh vegetables from July through September to subscribers who have prepaid during the spring.

In that way, members “share” in the farm before the growing season, and in return, they receive a weekly box of 10-12 types of freshly harvested vegetables. A weekly share in early July, for example, would look like bok choy, spring onions, kale, snap peas, radishes, lettuce, carrots, fennel, mixed greens, beets and fresh herbs.

Specialty items: Fresh, high-quality, regenerative/organic produce throughout the season, plus farm-fresh eggs. The farm is also known for its melons.

New in 2020: A high tunnel that will allow the farmers to produce a larger quantity and variety of early crops, whether that’s traditionally warm-season produce such as tomatoes, or early-season offerings such as snap peas. They will also be able to meet the demand for the off-season greens production that peaks during the winter, Blohoweak said.

How to get the goods: You can find Blohoweak and McCarty in Jacksonport on Tuesdays, in Baileys Harbor on Thursdays at the Farmstand, and on Washington Street in downtown Green Bay on Saturdays. Their CSA subscriptions are sold out for the season, but you can sign up for their mailing list and learn more at coldclimatefarms.com.