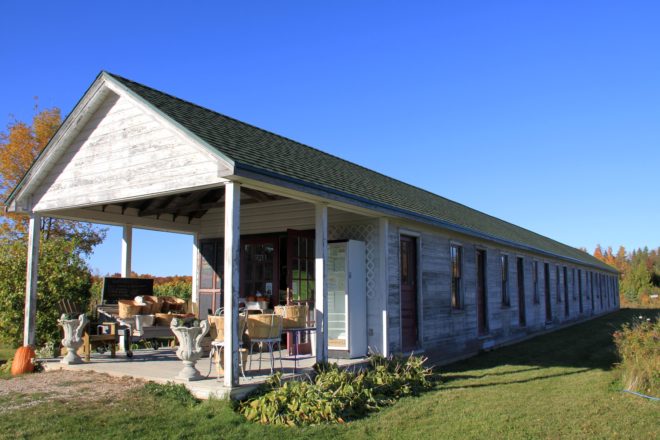 What is known today as Door County Wildwood Market, was once – technically – an Illinois family homestead. Photo by Aleah Kidd.

Location: On the corner of Highway 42 and Wildwood Road in Sister Bay

Meet Your Growers: Mary Pat and Mark Carlson; their daughter, Anna; and her fiancé, Scott

What is known today as Door County Wildwood Market, was once – technically – an Illinois family homestead. That’s because the ancestors of the Carlson family homesteaded the land in 1846 – two years prior to Wisconsin becoming a state. Remarkably, the land hasn’t changed hands during the time since, and it’s now owned by the fourth and fifth generations of the Carlson family: Mark and his wife, Mary Pat; and their daughter and soon-to-be son-in-law, Anna and Scott.

“He’s not officially part of the family yet, so we’re putting him to the test,” Mary Pat said jokingly. The four of them are responsible for all the work that happens at the farm: growing, harvesting, baking, canning, marketing, staffing the register and much more.

The day I stopped to visit, Mark had nearly finished scraping the paint off the exterior of the historic building to prepare it for repainting. The narrow, but long building originally served as housing for the migrant workers who came to the peninsula to work in the cherry orchards. It’s a distinctive building that catches your eye from Highway 42 as you head north out of Sister Bay, and Mark said they’ve even had past orchard workers stop in to thank them for preserving the building.

Inside, there’s an assortment of local goods, primarily from their farm and kitchen in Sister Bay, but also from other local businesses.

“We try to include other small-business owners to fill in with items that we don’t have,” Mary Pat said. “It’s not just about making a profit for ourselves.”

Mary Pat, in fact, has been instrumental not only in the success of the farm market, but also important to the entire state of Wisconsin through establishing a network of commercial, shared-use kitchens where food entrepreneurs can create their canned and baked goods. The network endeavor began when she wanted to make jams for the farm market but was having a hard time figuring out how to do so within state regulations.

“I thought, if it’s so hard for me to get started, it must be for others, too,” Mary Pat said. She worked with the state to establish what has now grown to be 350 shared-use kitchens, which, in turn, have supported, enabled and empowered hundreds of new entrepreneurs who can now operate their businesses by using the kitchens.

The farm market sells many goods and produce from its building, but the Carlsons are also known for their pick-your-own options, which include wildflowers, cherries and tomatoes. They also began pick-your-own sunflowers this year and plan to continue offering them next year, along with a sunflower maze.

Currently Offering: Check out the late-summer produce, including tomatoes, squash, corn and onions; and plenty of pumpkins, from classic carvers to specialty varieties.

How to Get the Goods: Visit the market at 2208 Wildwood Road in Sister Bay through the end of October, and year-round at dcwildwoodmarket.com.