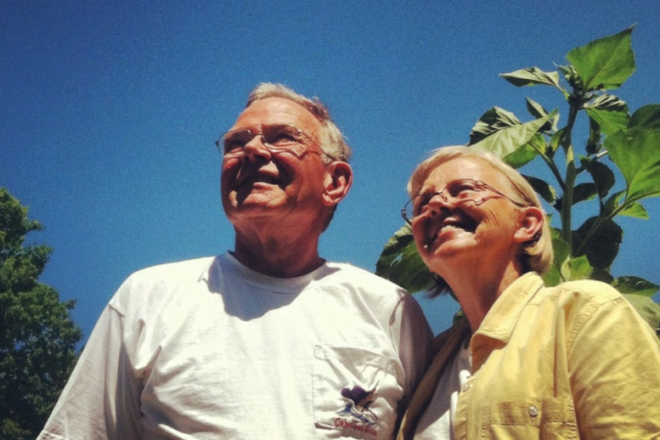 Myles and Mary Dannhausen started their garden on the corner of Maple Tree Road and Heritage Lake Road in Egg Harbor out of necessity. With six kids to feed and money scarce when they moved to the property in 1983, they began growing their own food and raising animals long before it was hip.

The goats came first – used for milk, but also to mow the grass on the property surrounding the home that had sat empty for decades. Then they tilled about an acre and started planting, assigning crops or animals to each of their children. (Their son, Pulse writer Myles Dannhausen Jr., got the strawberries, spinach and cucumbers.) For a time they also raised sheep, chickens, geese and rabbits, but eventually they settled on produce when the kids left for college.

In 2012, Myles and Mary took on a new challenge as they entered their 70s, building a 30-foot-by-72-foot hoop house with a grant from the Department of Agriculture. That helped them to expand the growing season and gain a foothold against Door County’s fickle spring weather.

What it didn’t provide was defense against a random thunderstorm that took down six mature trees, flooded the garden and tore the hoop house apart in 2017. They’ve since rebuilt it but cut back the size of the garden.

Mary spent many years selling at farm markets in Sister Bay, Jacksonport and Fish Creek, but the couple has curtailed its efforts in recent years to sell from the garden; grow produce for the Bay Point Inn, which Myles manages; and fill the home fridge. (When Gov. Tony Evers issued his Safer at Home order in March, they still had enough food preserved to get through several weeks.)

The Dannhausens sell tomatoes, scallions, kale, peppers, Swiss chard and more produce from the garden and by request at 7592 Heritage Lake Road in Egg Harbor. Call 920.421.0790.