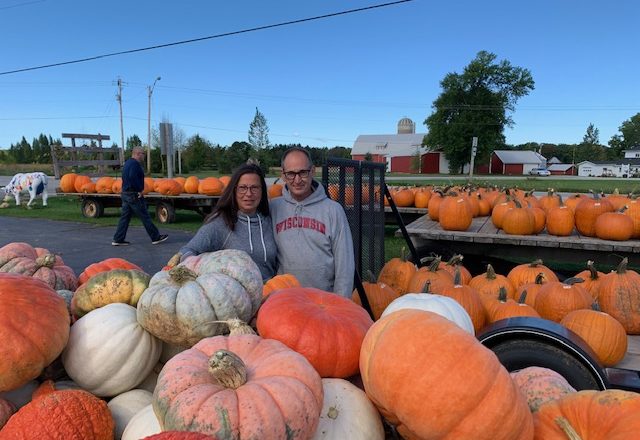 Dave and Karen Schartner are currently selling lots of things, but apples, pears, plums, pumpkins, squash and other autumn-themed fruits are front and center. Submitted.

Your growers: Dave and Karen Schartner

Currently selling: Lots of things, but apples, pears, plums, pumpkins, squash and other autumn-themed fruits are front and center.

In March 2019, a fire claimed one of the Schartners’ barns and all the inventory inside. Dave and Karen Schartner do plan to construct another building, but they’re currently occupied with the busiest season they’ve ever had.

“All the farm-market people I’ve talked to say they’re having a great year,” Dave said.

The silver lining of the pandemic for the farm-market sector has been a return to home cooking, a consequent demand for fresh produce and outdoor activities that people can do at a safe social distance.

“Pick your own cherries? It was phenomenal,” Schartner said. “It was our best pick-your-own season ever.”

Mother Nature did her part this season to help supply the demand, also providing the Schartners with a bumper crop of pumpkins.

“We always had enough moisture, and we had that heat in July, and pumpkins like it hot,” he said.

But Schartner said everything grew well this season on their 220 acres. Some of that is cash crops – soybeans, oats, wheat – but then there are also about 30 acres of cherries, eight acres of apples, an acre of strawberries, 10 acres of pumpkins and vine crops, and about an acre of garden produce such as tomatoes and cucumbers.

The Schartners started farming their property in 1982 and built their farm stand in 1986. That’s also the year when Dave’s grandfather suggested they tap their hardwoods for syrup.

“I said, ‘OK,’ and then Ole Olesson had his maple equipment for sale, and we built the [farm stand] building in January 1986 and started selling maple syrup,” Schartner said.

They’re excited that their grandson – Jaden, 19 – has shown an interest in carrying on the family business – an endeavor that Schartner acknowledged is not for everyone.

“For five months, there isn’t a lot of free time,” he said.