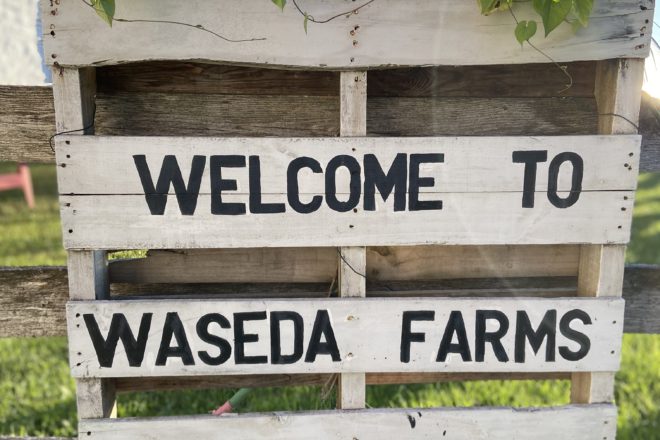 The garden at Waseda Farms looks like a lush wave, with colorful tomato trellises at its crest, and neat, green rows dipping gently toward the garden’s entrance. Grassy pathways extend throughout the garden and seem to invite visitors to wander down the rows of produce. A retired one-room schoolhouse sits nestled within a fringe of orange daylilies.

Because the garden is organic, the atmosphere of fresh, clean beauty is much more than just a superficial appearance – it’s infused in every aspect of the growth process, daily maintenance and harvest.

During most daylight hours, garden manager Dave Seabright (known as “Garden Dave” around the farm) is at work among the plants. Even while I interviewed him, he was moving down a row of raspberry bushes, picking fresh, organic raspberries for sale at the Waseda Farms Market.

In February 2016, when Seabright was hired as garden manager, he didn’t have much gardening experience outside of his own personal garden and the things he’d picked up from his father’s and grandfather’s affinity for gardening. But under the mentorship of Sharon Lutsey – Waseda Farms’ original garden manager and garden visionary – Seabright learned the ins and outs of the garden.

“Sharon Lutsey built this garden,” he said. “I’ve kind of been the steward for the last four years. To me, it’s a privilege and an honor to be here.”

Gardening in Door County is certainly not without its challenges. First, there’s the rocky soil. At the end of every season, compost must be spread about a foot thick over the garden beds to prepare for the growing season. And Door County is one of the driest counties in Wisconsin, so adequate rainfall is always a concern.

“Another challenge is just being organic,” Seabright said. “There’s always some little critter out there trying to kill my stuff, and I have to find creative ways of fighting it as best I can while staying within the parameters of organic products.”

Waseda Farms’ commitment to producing fresh, organic food means that when you walk through the garden, what you see is truly what you get.

“Like the shirt says,” Seabright said, referencing his Waseda Farms T-shirt, “‘Trust where your food comes from.’”

How to get the goods: Visit the Waseda Farms Market, open daily, 10 am – 5 pm, on Logerquist Road in Jacksonport. While you’re there, stop by the garden (across from the market) to check out the new produce and chat with Dave!