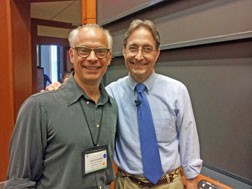 Sherman, the Weird Al Yankovic of his day, set his song, a letter home from a lonely boy suffering at summer camp, to Ponchielli’s short ballet “Dance of the Hours”, which was popularized with dancing hippos in Disney’s Fantasia.

Kopischke’s lonely letter home reflected the experience of the Strategic Perspectives in Nonprofit Management Executive Education program that he and 158 other nonprofit managers from around the world participated in beginning the week of July 13. While that may not sound like a subject ripe for comedy, you can see the reaction he got when he performed it for his seminar colleagues because it was posted on Youtube. Search for Camp Harvarda.

On a serious note, Kopischke says being in the program at Harvard Business School reminded him of his mission back home in Door County.

“I feel like I got my own version of the Birch Creek experience,” he said a few days after returning from Harvard. “Our students have so much fun and are so enriched by the opportunity of being with other people who love what they love, get immersed in it, get a chance to learn, to experiment with world-class faculty and come away with an experience that for many of them is life-changing. I feel like I had a similar experience by being with people who care about things I care about, learning and experimenting, having just incredible leadership and mentorship, and coming away with experiences and a network that are going to last the rest of my life.”

The participants in the program came from a broad range of nonprofit backgrounds, with the majority (53) coming from human and social services organizations. The next largest groups were education (22), community development (17), health (15), arts/culture/humanities (15), housing (9) and environment/conservation (7). Civic/advocacy and religion were tied at five representatives each, and seven other participants were listed as representing “other” nonprofit bases. As a group, they manage $2.4 billion in revenue.

“It was really a diverse and accomplished group of people,” Kopischke said. “There are certainly real structural differences how different agencies operate, but it’s amazing when you boil it down, we have similar challenges.”

The large group is broken down into two groups, and smaller “living” groups emerge from those. The groups are then given nonprofit case studies to examine.

“To go through a case really made for very robust and tremendously insightful discussions, looking at the cases from a lot of different angles,” Kopischke said. “We all came in with our strong opinions about what was done well and what wasn’t by the people involved in the organization. Pretty much every single time we came away with how much more rich and complex the challenges were than you first realized. It was a remarkable experience. I learned so much, new ways of thinking about our challenges and practices, and working with those ways of thinking.

“It was very empowering to be able to spend a week very immersed in fairly commonly held issues with extremely accomplished and bright people as colleagues, to have this incredible resource base for the whole week. Many, many of these people are now part of my network and resource base going forward.”

Kopischke points out that this enriching experience never would have happened without a lot of support. 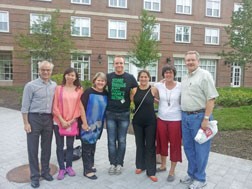 “Almost a year ago I encountered a Door County philanthropist who I’ve known for several years. He happens to be a graduate of Harvard Business School,” he said. “He asked if I knew about this program. I said I had heard of it many years ago and was interested in it and had a few friends go through it. I said it was always something I wanted to do. He said, ‘If you ever want to go, I’ll pay for it.’ I was stunned and thankful.”

But he didn’t think it was very likely because the annual seminar is always held in the summer, when Birch Creek is in session.

“I said I will bring it to my board. And the board was extremely supportive,” Kopischke said. “It was very difficult to take a week at the height of the season. When this opportunity arose, I was shocked at how supportive Birch Creek’s entire board was on saying this is a great opportunity and it’s going to bring benefit back to us, and we’ll make sure we cover this. The same reaction from the staff here, and from my family. We made sure things could go on without my having to check in other than late at night. Things went smoothly here.”