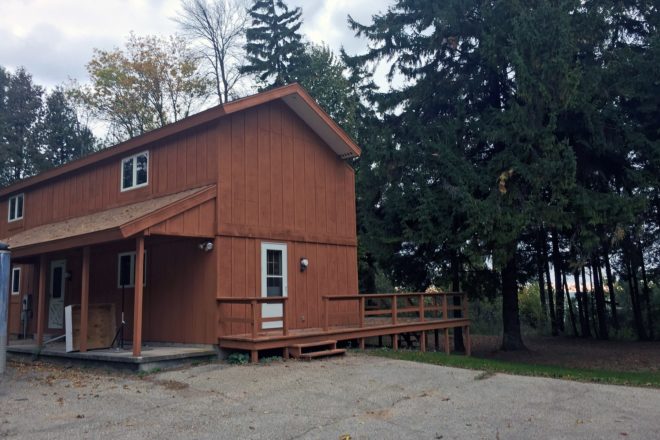 The Koulias home in Jacksonport has been sold for $1,200. Photo by Jess Farley.

The Town of Jacksonport revealed on Dec. 29 that one valid bid had been submitted for the three-bedroom Koulias home on the town’s Lakeside Park property.

The winning bid for $1,200 was submitted by Stefani and Todd Burke.

Stefani Burke could not stand the thought of the Koulias home – or any good structure for that matter – being destroyed.

“I think it’s a shame to let this house go for that much money. It’s worth a lot more than that,” said town chair Randy Halstead, but he called for a vote. Town Supervisors Tim Bley and Tom Wilson voted to accept the bid and Halstead voted against.

Stefani Burke, who serves as president of the Liberty Grove Historical Society and comes from a family of structural movers, said she could not stand the thought of the perfectly good home being destroyed.

“I don’t like to see any buildings in Door County torn down,” she said.

Her family owns DeVooght House Lifters & Building Movers, which earlier this year was involved in the move of a historic home next to the Paine Art Center in Oshkosh. Her sister, Tammie DeVooght Blaney, is the executive director of the International Association of Structural Movers. So moving a three-bedroom Wausau home is no big deal for them.

Another bid was submitted by the Jacksonport Historical Society, but after the town consulted with its attorney, Randy Nesbitt, the historical society’s bid was found to be defective for not following submission guidelines or meeting the submission deadline.

Burke said she does not want the house to cause any more division in the town. Before the town decided in November to finally put it up for bid, there was division between those who wanted the house out of the park – whether moved or deconstructed – and those who wanted to put it to town use in the park.

Burke said her original intention was to move the home to the property where she and her husband run Dave’s Tree Service, which was started by Todd’s father.

“When my in-laws bought the property for the business, they configured the well and septic for a three-bedroom home but they never built on it, so for us it was kind of a win-win,” she said.

“The house is in moderate shape. It’s just a common Wausau home. Most things it needs are cosmetic. Being on the lake, it kind of has a mildewy smell, but there’s no mold in the home. We’re going to rip up all the carpeting. The whole house was carpeted. I think that we’ll get rid of some of that.”

Burke said she would be talking to the Jacksonport Historical Society to learn what their intentions were for the home.

“Before I say I am taking that house, I want to talk to them,” she said. “Todd and I try to be community people.”