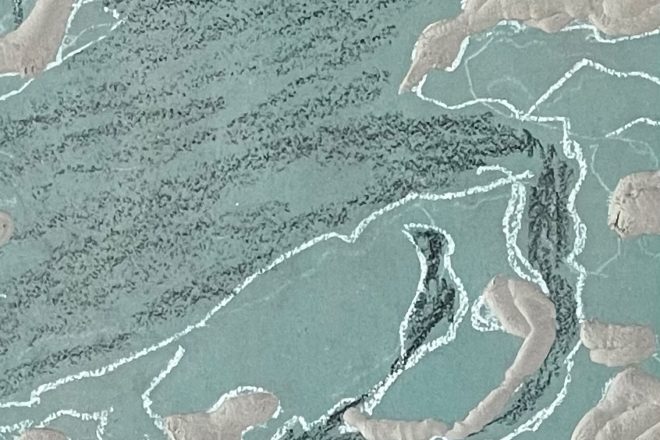 “Carving into the Light” by Anne Kelly.

The Between the Cracks exhibition at the Kress Pavilion in Egg Harbor grew out of two workshops conducted via Zoom during which the participants discussed the feelings that were holding them back, such as guilt about procrastination. They were then asked to “create from the in-between spaces of life, where everything familiar disappears and one steps into the unknown.”

Artist Dawn Patel, owner of Brilliant Stranger in Egg Harbor, developed the concept as part of Egg Harbor’s Public Art Initiative. She linked it to the pandemic-driven feeling of falling between the cracks, and she chose an obscure term, “liminal,” which is used primarily in anthropology to refer to rites of passage.

The invitation to participate explained that the workshop would use visualization, automatic writing and drawing, meditation and consciousness exploration.

“Each person came from a deeply personal space and made a piece in response to the experiences we were talking about,” Patel said, “so it didn’t surprise me that pieces turned out to be different. A couple of people decided not to make art but stayed in the workshop.”

The goal was to engage those whose work is not well known and “give people opportunities to think, share what they are doing and see what everybody else in the community is doing that is not necessarily part of the visible arts community here.”

The show drew 12 participants, including six year-round Door County residents and others from Florida, southern Wisconsin and Minnesota.

Anne Kelly, a printmaker who divides her time between Door County and Chicago’s Loop area, used her wall label to explain the process she used to create “Carving into the Light” with a linoleum print block.

Brenna Busse displayed objects, wires and dangling, rusty nails mounted on boards titled, “Rememberings: marking place, to hold her here, let go again …” She made the pieces as part of a “Rememberings” series after her youngest sister died.

“They became a map and a healing as I navigated her loss, found my way in grief. As a maker, introvert and creative being, I have been familiar with liminal space all of my life,” Busse wrote. “It is only recently that I have learned the name for it. Dawn’s class has deepened my understanding and appreciation, as well as enriching my artistic process.”

Erika Lukas created a work titled, “The Khabs Is in the Khu” and wrote on her piece, “I have only one thing to do and that’s be the wave that I am and then sink back into the ocean.”

Textile artist Mary Carson titled her piece, “The Caregiver’s Job Has Ended.” It shows an elderly man sitting alone on a chair next to a now-empty bed.

“I tell stories with hand stitch and appliqué that point to the beauty and hope found within life’s simple moments,” Carson said.

She wrote: “The ‘front door’ is purposefully left ajar so the viewer can see it as well as what it reveals within. If you are very gentle, I invite you to open the piece by the black frame (not the painting of the door, please). Inside is the spiral embroidery surrounded by the night sky, further framed by pieces of an original drawing I created during the workshop.

“This workshop about exploring and honoring liminal space has reminded me how much I love to explore the creative process. I was encouraged to enter a zone that was both uncomfortable and surprisingly productive.”

Mari-Jo Young created a quilted piece, “Between the Cracks,” and explained, “I am a traditional quilter trying to work toward art quilts and textile arts. The concept of liminality is intriguing, as it not only describes quarantined life during the pandemic, but the struggles moving from precise, quarter-inch seams and quilt piecing to the abstract. This is my first attempt using variations of a photo I took in an iPhone photography class.”

Dawn Patel titled one of her works “Above the Grid” and explained: “The grid-like structures enclose our sentience, blind us to our radiance and the truth of our being. Promising safety, belonging and livelihood, they create limitations and separation. The liminality of infinite space at first feels unstable and uncertain. Leaving the cage can be scary.”

The exhibition – which includes textiles, mixed media, printmaking, cold wax, poetry and photography – will remain on display until May 31. The workshops are available at paiofeggharborwi.org, and the images from the show are also available at facebook.com/kresspavilion. Patel adds that those who are interested in taking part may send her a photo of their work to be considered for an ongoing Facebook exhibit.