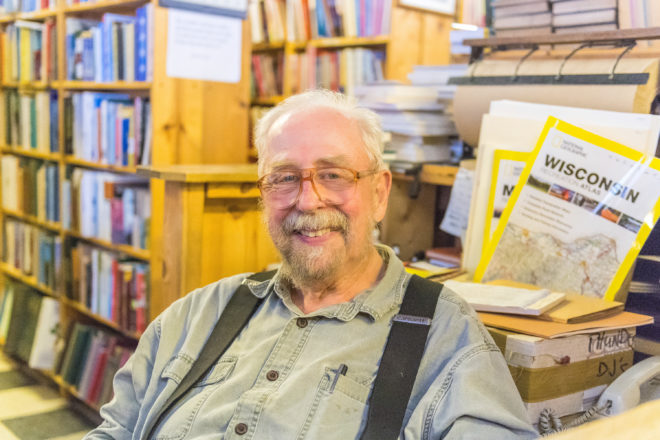 The world now knows what residents of Ellison Bay have known for years: Kubet “Kubie” Luchterhand is a bookseller and publisher of great distinction. His bookshop, Wm. Caxton Ltd., has recently been designated as one of the 50 best independent bookstores in the country (26th place). Any book-loving visitor to Door County should make the time to stop in Ellison Bay, browse in the Caxton bookstore, and meet the jovial Kubie.

When a visitor enters Caxton Ltd., the first thing he or she will notice is a colorful display of books with bright covers, some of them murder mysteries with titles like All Fall Down and Hell is Empty. Customers are waiting in line, including a scrawny youth who is balancing a stack of eight books of varying sizes and shapes. Kubie is behind the counter, chatting with his customers (or reading in his favorite corner if business is slow). There are the towering bookshelves – rows and rows of them – and the books: Selling Hitler, The Hole in the Sky, Chuck Wagon Cookin,’ The Clothes Have No Emperor, as well as such recognizable works as Plato’s Republic, Bill Clinton’s autobiography, The Complete Novels of Jane Austen, and some books by Václav Havel. Some of these volumes are worn and musty; others are almost new, with gleaming dust jackets. Kubie estimates he has almost 100,000 volumes in stock. A curious bibliophile could lose himself in this place and get locked in for the night. 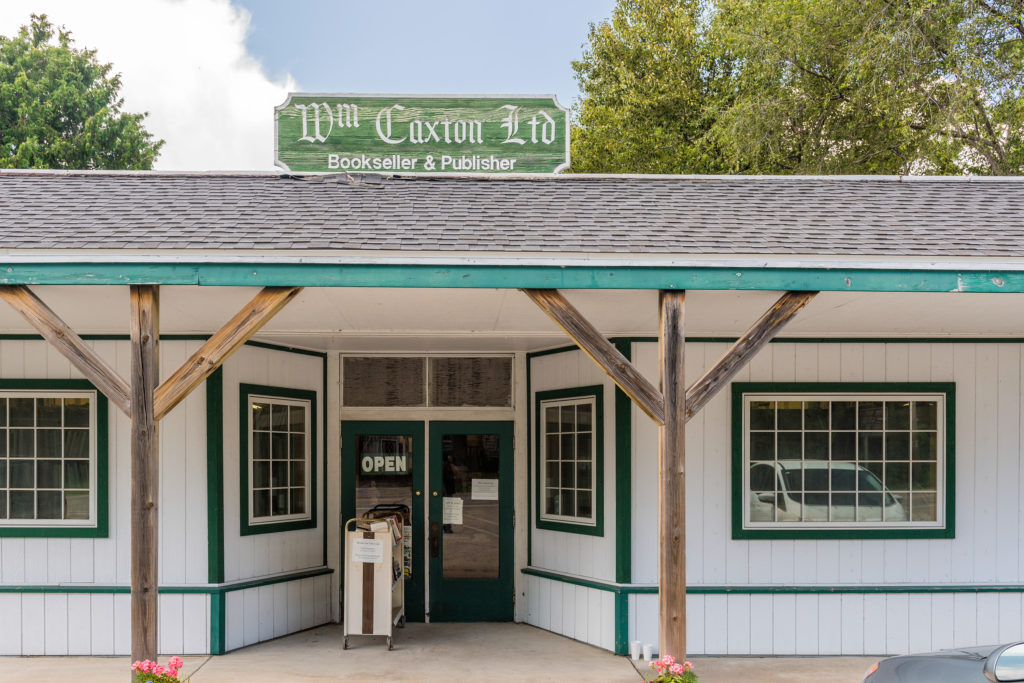 Wm. Caxton Ltd., owned and operated by Kubet “Kubie” Luchterhand, was recently named among the 50 best independent bookstores in the country. Photo by Len Villano.

Kubie has never had anything like a “career plan” in place; he is more inclined toward serendipity. At one time he was a professor at Roosevelt University near Chicago. Campus life had many satisfactions for Kubie: he liked his students and enjoyed access to a fine library. One of Kubie’s former students, Dorothy Anderson-Metzel, signed up for all of his classes because, she said, he was “a good lecturer” and “erudite.” But eventually he became disgusted by collegiate politics. After sitting through one pointless meeting too many, he decided the time had come to seek a different destiny.

Kubie established himself as a “book searcher,” an occupation that vanished when the internet arrived on the literary scene. A client would come to him asking for a book that had long been out of print and seemed to be unavailable in libraries. Working out of a basement office, Kubie would begin by placing advertisements in the New York Times and other nationally known newspapers, and after some clever detective work, he could usually find what his client wanted.

The income from book searching enabled Kubie to open his first bookshop in Evanston, Illinois. It was a tiny place, only 350 square feet, and it carried mostly “remainders” – books sold at a reduced price after sales have fallen off. It soon became apparent that “the only person making money was the landlord,” according to Kubie. He concluded that in order to succeed, a bookstore needed a “critical mass,” both of books and of space – at least 2,000 feet – in order to appeal to customers. (A true bibliophile knows a good used bookstore should possess an air of mystery, so when a prospective customer glances around, he automatically starts to dream of finding a signed first edition of The People, Yes by Carl Sandburg – or, better yet, a moldy box containing the manuscript of an unpublished novel by J.RR. Tolkien, a treasure that somehow got lost on its way to the Tolkien collection in Milwaukee.)

Kubie went looking for a sufficiently spacious building, but he had difficulty finding a real estate agent who would help him. A building as big as a barn, just to sell books? Unheard of! At last, however, he settled on the property in Ellison Bay. Anderson-Metzel said Kubie’s bookstore has succeeded partly because “he has a mixed bag of new and used books, including some good mysteries. He’s a true bookman.” Kubie not only sells books but also publishes them, one title a year. He named his shop “Wm. Caxton” after the first English printer, who was a contemporary of Gutenberg. Kubie assumed everyone would recognize the name. Instead, people ask him, “Are you William Caxton?” 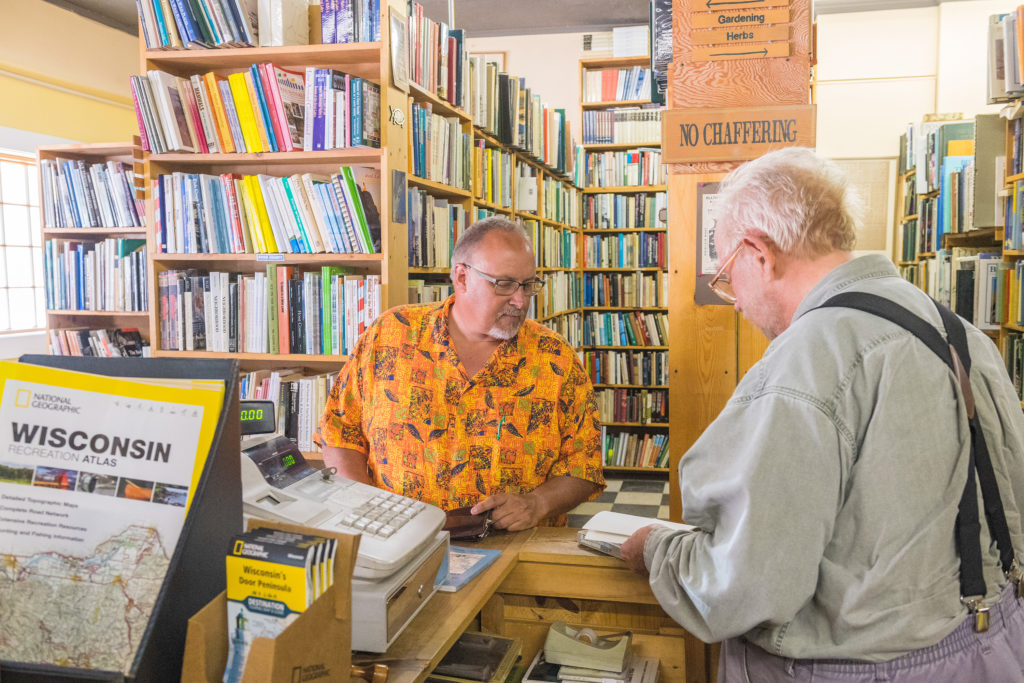 Of the 35 books he has published, Kubie is most proud of an anthology titled Fish Creek Voices, partly because he was involved in every aspect of creating the book, including the editing. But his favorite book is Edward Lueders’ oddly titled Clam Lake Papers, originally published by Harper & Row. Kubie described this work as “contemplative.” It is a record of a man’s musings while he spends a winter in a cabin in northern Wisconsin. It is the sort of book that normally gathers dust on library shelves, but Clam Lake received glowing reviews and became a bestseller.

“They couldn’t print copies fast enough,” Kubie recalled. But even most bestsellers eventually go out of print. Kubie wanted to republish the book but first he had to get Lueders’ permission. He soon encountered a “dragon lady” librarian who resolutely defended Lueders’ privacy. Denied access to Lueders, Kubie gathered the books he had published and mailed them to the dragon lady. When she and Lueders saw the quality of the books, Lueders gladly gave his permission.

According to Larry “Thor” Thoreson, who operates Gills Rock Stoneware in Ellison Bay, Kubie is not only a bookman but also an asset to the community.

“He’s a man of many interests,” Thor said. “He served as chairman of the town board and volunteered as a firefighter. He makes beautiful benches out of stone. He’s a gardener, a good cook, and a gifted raconteur. And he makes a nice stack of firewood.”