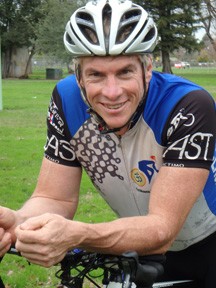 Kurt Searvogel recently finished his 365-day bike ride, logging 76,076 in one calendar year to break the 77-year-old world record. Searvogel, staying with relatives in Manitowoc, spent a good portion of the summer riding through Door County on his quest to break the record.

“What he’s doing is so beyond comprehension,” said Karl Schroeder of Sturgeon Bay, who crossed paths with Searvogel on a couple of bike rides. Schroeder typically rides about 8,000 miles each year as an avid cyclist. “To do a double century a day every day…you knock one day of riding out and you have to make it up with 400 miles.”

The Waupun, Wis., native averaged more than 206 miles every day since Jan. 9, 2015. For most of the summer he made daily trips from Manitowoc to Baileys Harbor and back.

Searvogel finished the ride in Florida, breaking Tommy Godwin’s 1939 record of 75,065 miles. Guinness wasn’t accepting any challenges to the record after dealing with faked attempts and questionable recording of mileage. When the Ultramarathon Cycling Association created a strict set of rules to record each day’s ride, three set out to break the record. Searvogel was the only one who did.