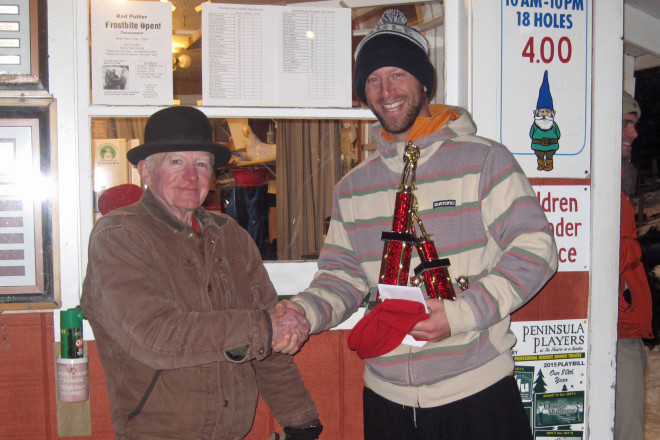 Tournaments at The Red Putter draw competitors from around the country, even in winter. Here Bob Yttri congratulates Nick Kwaterski on his Frostbite Open win on Jan. 1.

It was the third time Kwaterski has won the championship at the course in Ephraim, starting the new year with a $700 prize and Red Putter hat. His two-round score of 83 included a one-round best of 41.

Cal Lautenbach of Milwaukee took second with an 89, while last year’s champion, Paul Nelson of Fish Creek, won a playoff with Jim McDonald an Austin Weigman for third place.

It was the sixth annual Frostbite Open, and a total of 42 players finished the 2 round tournament, each taking home an “I Survived The Frostbite Open” bumper sticker.

Conditions at the start of the tournament were rather mild at 24 degrees with a light wind and a bit of sunshine.  The Red Putter crew worked hard to prepare for the tournament as over a foot of snow fell on the course on December 29th.

The next tournament will be The Red Putter Pro Tournament on Saturday, August 6.