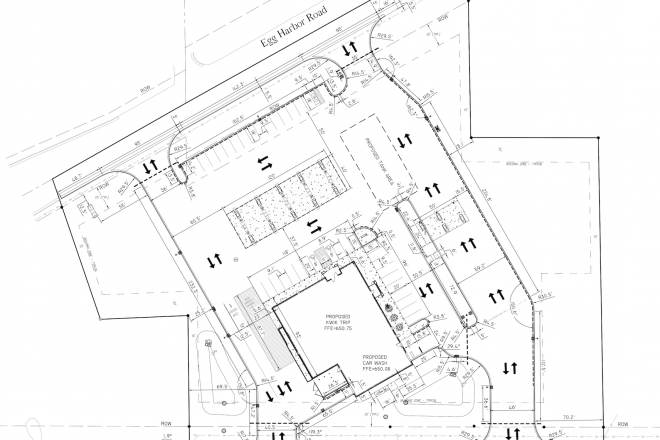 Kwik Trip will take plans for this store and car wash to the city’s plan commission on Oct. 20. Source: City of Sturgeon Bay.

It was late June when Sturgeon Bay Mayor David Ward spoke enthusiastically about Kwik Trip’s possible entry into the City of Sturgeon Bay, though nothing had been firmed up at that time.

“I want this to happen,” Ward told the Peninsula Pulse back then. “Their average investment in a new store is between $1 million and a million and a half.”

Ward again teased the information at the end of the Common Council’s Tuesday-evening meeting that those with an interest in Kwik Trip should tune in or attend the Oct. 20 plan commission meeting.

This time, a formal plan is afoot.

Kwik Trip will present its plans to the commission Oct. 20 and seek a conditional use permit (CUP) for a development that includes a store, car wash and multiple diesel and gas pumps. The diesel area will be separated from the gas pumps, and the store will be approximately 12,000 square feet.

“I think people are going to be surprised how big the development is,” Robinson-Sullivan said.

The development would encompass roughly 4.5 acres on six separate properties, with Malvetz Furniture and Floor Covering, 1611 Egg Harbor Road, being one of those. Frontage would be located on Egg Harbor Road, with frontage access also from Alabama Street.

Four of the properties are zoned for commercial use, but two have residential zoning. A portion of a driveway would extend through those residentially zoned properties, but not a building, so no rezoning is necessary, Robinson-Sullivan said.

The company must secure a CUP because of the car wash’s drive-through. According to the city’s zoning code, any drive-through requires the special permit and a process that includes a public hearing. It was the same for the former Nicolet Bank building in downtown Sturgeon Bay. Even though the bank had operated a drive-through for years, the new cafe owners had to apply for a CUP to use the drive-through.

“There is some logic there, but it’s kind of dated,” Robinson-Sullivan said.

In addition to the CUP approval, the company will need a variance for some setbacks for the Egg Harbor Road parking lot, approval on a stormwater-management plan and a regulated use permit for the underground gas tanks.

“It will be the first time we’re using that,” Robinson-Sullivan said, regarding the regulated use permit that seeks to protect the groundwater. The land within which the tanks would be buried is in a contributing groundwater zone for two of the city’s five drinking-water wells.

The company will also need to gain approval from the city’s Aesthetic Design and Site Plan Review Board.

In all, the process will take almost two months, Robinson-Sullivan said.

“I believe they plan to start construction next spring,” he said.

Kwik Trip has been scouting the city for locations for several years, according to city officials. In all those discussions, the company has always indicated it wants two sites, not just one.

“They’ve consistently said if they do one store, they want two stores,” Marty Olejniczak, community development director, told the Peninsula Pulse in June. “They’ve always said one east [side] and one west [side].”

“We’ve probed, but they haven’t said anything,” he said.