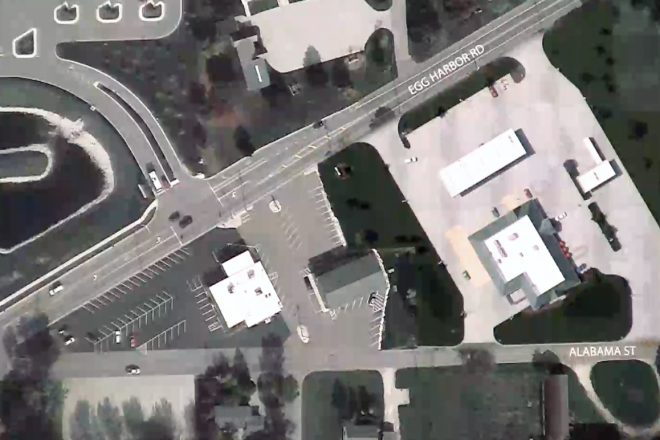 The zoning allows the business use, but the permit was required because the car wash is considered a drive-through operation. All drive-throughs need a CUP. The process of granting that permit entailed a presentation by Troy Mlezevia, Kwik Trip real estate development manager, followed by a public hearing and the commission’s discussion and vote.

The combination store-and-car-wash building is designed to be 11,000 square feet, and the development would include fueling islands. The project represents a multi-million-dollar investment not only in physical improvements, but through the employment of between 25 and 30 people, with a projected payroll “north of half a million dollars annually,” Mlezevia said.

The development would encompass roughly 4.5 acres on seven separate properties that front the 1500 and 1600 blocks of Egg Harbor Road, and/or the 1600 block of Alabama Street. Those lots currently contain five homes, several storage buildings and the Malvetz Furniture store. The overall site is owned by the Van Den Bogart family and is under a purchase agreement with Kwik Trip that’s contingent on securing city approvals.

Vehicles would enter on Egg Harbor Road and exit primarily on Alabama Street from the diesel pumps or car wash. Traffic flow at the site and heavier use on Alabama Street – which doesn’t have sidewalks, but draws pedestrians and bikers – elicited the most concern from commission members, who otherwise supported the development.

The traffic flow would empty motorists onto Alabama Street, requiring those returning to the highway to take 18th Street to Egg Harbor Road.

One of two gas-pump stations with two diesel pump lanes were intended for recreational rather than semi traffic.

“Our thought is you’d have more RVs and people with trailers here, rather than pure 18-wheel traffic,” Mlezevia said in response to expressed concerns. “That’s not the primary user. Our intent is not to have this as a highway truck facility as you would in a metro area.”

Traffic flow and safety on Alabama Street dominated the conversation. Mayor David Ward, who chairs the plan commission, said there were other places to address those concerns, such as the city’s Parking and Traffic Committee.

“We have established in our comprehensive plan this is commercial, and with commercial, you get traffic,” Ward said. “We can do various things. Maybe it’s time to think about sidewalks on 18th, though a good portion of that is not in the city.”

During the public hearing, one non-neighbor of the proposed development suggested Kwik Trip build one of its less active developments without a car wash. Two neighbors also spoke, saying they did not support the development and the changes it would bring to their quality of life because of increased noise, lights and 24/7 traffic. At a minimum, they sought additional sound and visual barriers through adding fencing and more plantings, and they were concerned about their property values.

He also said there are multiple gas stations on Egg Harbor Road already – one just a block away from the proposed Kwik Trip site.

“We don’t need another gas station on this side of town,” he said.

The city also received an email from an Alabama Street resident who pointed out that increased traffic would exacerbate the existing traffic problems caused by motorists who are not obeying the 25-mph speed limit. She asked for additional traffic-safety measures, such as a four-way stop or sidewalks.

Plan commission member and Common Council Alder Kirsten Reeths also pushed for sidewalks, but they fell outside the purview of the subject they were reviewing for approval, said Marty Olejniczak, Sturgeon Bay’s community-development director.

“The issue at hand is about the drive-through facility, not about the use, which is allowed,” Olejniczak said. “So you have to make your conditions backed by substantial evidence.”

Olejniczak said a “rational nexus between the condition and what’s being proposed” would include screening to buffer noise and visuals, for example. “If it does relate to the flow of vehicles, that’s part of the drive-through of the site.”

Christopher Sullivan-Robinson, city zoning/planning administrator, suggested that some of the traffic issues could be alleviated if a lane were constructed on the other side of the car wash, allowing traffic to circle around the building and exit onto Egg Harbor Road rather than Alabama Street. The commission members liked that idea and unanimously approved the CUP with direction to the city’s Aesthetic Design and Site Plan Review Board to require a traffic lane around the building, as well as a tall fence with additional screening.