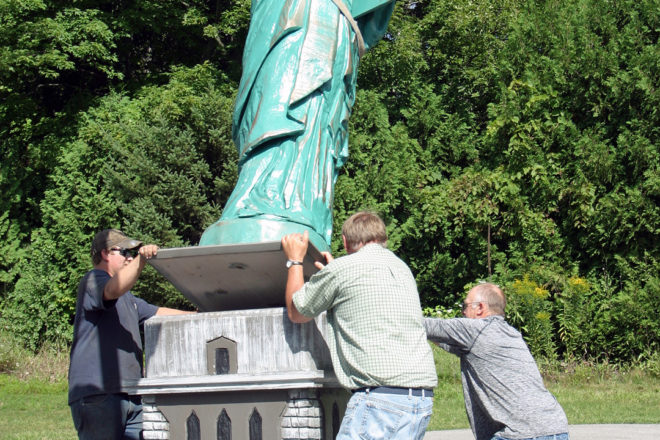 A 16-foot white pine replica of Lady Liberty was erected at the Liberty Lodge in Sister Bay last week.

The 1,200-pound statue stands atop a 1,200-pound pedestal, also of white pine, fashioned by Hurley, Wis., chainsaw artist Jeff Prust, who created the incredibly detailed Lady Liberty from a photograph, using only a chainsaw and sandpaper.

Liberty Lodge Manager Julie Hathaway said the statue was commissioned to replace a large cedar tree that once grew in the same spot but was declared beyond saving shortly after the January 2015 death of lodge owner Bob Nueske.

The statue was set in place with the help of a two-man crew with Hockers Excavating.

Hathaway said visitors are encouraged to stop by to see Lady Liberty and take photographs with her.