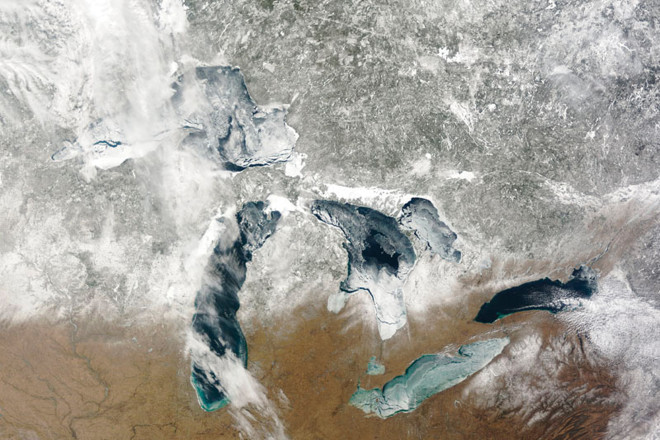 The lake was more than a foot higher in spring 2012 than spring 2013. The long-term average level of the lake is more than two feet higher than it is now.

So go to a beach and stand at the point where the water meets the land. Imagine the waves raised by a foot, rolling against your calves. Keep standing there and turn toward the land. Picture how far that water, a foot high on your legs, would reach on the beach. 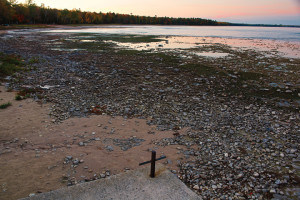 That missing foot of water makes a big difference on the shoreline.

Lake levels are all about balance. When the amount of water coming into the Great Lakes matches the amount leaving, the water levels stay the same.

“The simple answer is there’s more water going out than coming in,” said Jim Lubner, adjunct professor at the University of Wisconsin – Milwaukee School of Freshwater Sciences.

Water enters through precipitation and runoff, and leaves through evaporation. A lot of evaporation takes place in the fall, when cool air sucks up warm water off the lakes.

“It seems to be that the balance we have been used to over the last century between the amount of water coming in from rainfall and runoff being balanced by the amount of flow and evaporation has changed,” Lubner said.

Many factors affect how much water enters and leaves the Great Lakes. Lubner and Jia Wang, Ice Climatologist at National Oceanic and Atmospheric Administration’s Great Lakes Environmental Research Laboratory, said increased evaporation of lake water is most to blame.

“Evaporation plays a big role, and that evaporation is dependent on ice cover,” Wang said.

“Evaporation has been way above average for the past 13 years,” said Andrew Gronewold, hydrologist with the NOAA Great Lakes Environmental Research Laboratory. 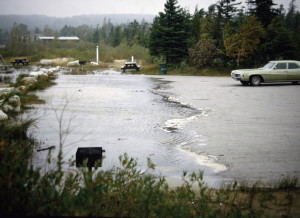 “If we average all the ice cover from December to April, last winter was the minimum,” Wang said. “It was about four percent.”

Last winter’s four percent ice cover wasn’t a glitch – it was part of a trend. Annual average ice coverage has dropped 63 percent in 40 years. Since then, air and water temperatures have increased and water levels have decreased.

“That is not a coincidence,” Wang said. “They have a relationship.”

Ice coverage is determined by air and water temperatures. The National Oceanic and Atmospheric Administration documented 2012 as the hottest year on record.

“That will translate into ice decline from 40 years ago to nowadays, at a very steady rate,” Wang said. “With this kind of ice cover decline the water level should decline. It will decline.”

While climate has caused the recent drop in lake levels, it’s not the only factor to affect the height of water on our shores.

The St. Clair River was mined for sand and gravel in the 1800s and the Detroit and St. Clair Rivers were then dredged in the 1910s, 1930s and 1960s to create better navigation channels for ships, according to the Army Corps of Engineers.

Water drains from Lakes Michigan and Huron through the St. Clair River into Lake Erie. Water flows faster when the river is deeper, causing our lake levels to drop. 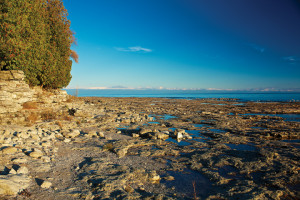 But remember, those 20 inches have been gone since at least the early ’60s, when the major dredging projects were finished.

It’s been at least 40 years since we’ve lost those inches, and since then we’ve had periods of record high water, when shoreline cottages slid into the tides and storms beat waves into coastal towns.

That means the low water we’re seeing now is not primarily caused by the dredging, mining and erosion of the St. Clair River.

“There are a whole number of factors that affect water levels, but the key factor affecting them right now is the climate,” Nevin said. “[Dredging] certainly has had an impact, but it’s a fixed impact. It isn’t something that changes over time.”

In summer 2012 the IJC, an organization that helps the United States and Canadian governments make decisions about the Great Lakes, reviewed the International Upper Great Lakes Study, put together by scientists from around the basin. The scientists listed possible ways to control water levels in Lakes Michigan and Huron, like installing structures such as speed bumps or turbines in the St. Clair River.

The scientists ultimately said the IJC should advise governments to leave levels alone, a conclusion not popular with some regional municipalities. But the scientists agreed that installing a physical structure to regulate the amount of water in each Great Lake could cause more political, ecological and navigational problems. 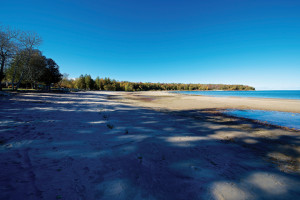 Building something to control the levels would mean someone would have to decide how much water should be in Lake Michigan, which could affect the levels of other Great Lakes.

“You don’t want to create another set of problems by trying to solve the problems you’re seeing today,” Nevin said.

That’s why he said it’s important to remember the history of the lakes when thinking about the future.

“Be sure to put things in the context of history,” Gronewold said. “Water levels on the Great Lakes have gone up a lot and down a lot. Don’t forget about it.”